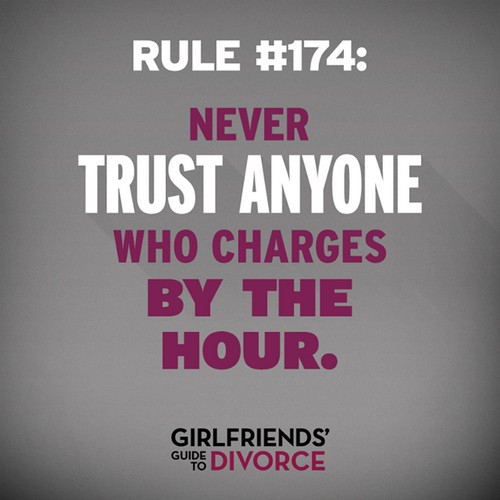 Tonight on Bravo Girlfriend’s Guide to Divorce returns with a new Tuesday December 9, season 1 episode 2 called, “Rule #174: Never Trust Anyone Who Charge by the Hour,” and we have your weekly recap below. On tonight’s episode Abby (Lisa Edelstein) has to try and recover from her public breakdown and save the Girlfriends’ Guide. . . brand. Abby and Jake (Paul Adelstein) attempt to have a “good divorce” for the sake of the kids.

On the last episode, Abby McCarthy (Lisa Edelstein), famous author of the best-selling Girlfriends’ Guide. . . mommy advice book series, had been living a lie. She had been hiding from her fans, friends, and family that she had separated from her husband. Now that her husband was actively dating, she began to take the advice of her divorced friends (Janeane Garofalo, Beau Garrett) which lead to some unexpected and life-changing experiences.

On tonight’s show as per the Bravo synopsis, “Abby (Lisa Edelstein) has to try and recover from her public breakdown and save the Girlfriends’ Guide. . . brand. Abby and Jake (Paul Adelstein) attempt to have a “good divorce” for the sake of the kids. Meanwhile, Lyla’s (Janeane Garofalo) ex-husband exacts revenge for his DUI and Phoebe (Beau Garrett) asks Abby out to dinner.”

Abby is having a meltdown reading the comments people are writing about her online. After being talked down, she arrives at the publisher to find that her publicist is gone due to an “important meeting” and she has a new one. The new publicist tells her the remaining 11 stops of her book tour have been canceled by Barnes and Noble after she ‘said she wanted to kill her husband.’

She then goes at meets with her ex-husband to look at apartments and has to break to him that they’ll need to get a cheaper apartment because her book tour has been cancelled. She then receives a text from Nate saying he misses her.

Jake and Phoebe talk about  the fact that he can’t yet tell him about their relationship because he and Abby made a pact that they would wait to tell the kids about any new relationships. He laments the issues he’s having with getting work now that he’s not with Abby anymore. She tells him he should meet with producer Mark, and he says he doesn’t think he’d be comfortable with that, and that he thinks he’s going to get a movie financed.  He tells her they can’t rush this.

Lyla finds that her car is missing, and receives a note saying he got the DUI report, he should have known it was her, and let’s see how she enjoys having no wheels.  She calls him about the text messages, and he says another with a video showing her car has been covered in graffiti saying “Bitch on Wheels.”

Jake talks to Abby’s brother, and he tells her if he needs more time to  work things out financially, he can depend on his sister.

Abby meets with her brother. She receives a text from Phoebe asking her to dinner, and her brother encourages her. However, she says that for better or worse, she’s  straight.

At dinner, she tells Phoebe she isn’t gay or bi or attracted to her or her friend. Phoebe says she is sorry and that she is a “lezzie drunk.” She says she isn’t even thinking about sex right now because she’s focused on her new business, though she doesn’t know what that business is. The friend, the lawyer, gives her advice on her relationship, criticizing Jake for not being financially stable and saying that if he’s comfortable being “in transition” for 10 years, he’ll be happy fleecing her for all she’s got.

Abby meets with Nate and says he has to stop texting her, but he says he should give him a chance as they haven’t spoken since the divorce. He tells her he feels guilty because he feels responsible for the divorce, but she says a lot had been going on before that point.

She sees Jake, and has to go, telling Nate that she may not be married, but he is, which makes her guilty.

When Abby gets home, her maid asks if she will be fired now that the couple is divorced. She reassures her she will not be fired. The maid says that the divorce is so sad, but Abby says they’re still a family, just a different kind of family.

She goes into her daughter’s room and sees a poster of her ex-husband’s new girlfriend. Her daughter says Jake told her someday she may even be able to meet her.

At the house, Abby apologizes for the Jew remark and the fact that she saw him  at the school with Nate, saying that she was telling him to stop. He says it doesn’t matter and isn’t his business anymore.

Abby and her friends go to Gwyneth’s baby shower, and Abby sees Becca walk in.

She starts telling Abby how she thinks the kids are going to love the new place, and Abby says that the two of them haven’t decided anything yet. Becca then tells her that Jake has already signed the lease.

When Jake arrives home, Abby immediately tells him he needs to move out. He says he was going to tell her about the lease, and she says she needed to ask him. He says they have savings, and she responds that’s her money. He asks her if this has anything to do with the fact that she heard this from his girlfriend, and she criticizes him for having a poster of her in their 14-year-old daughter’s room.

She says she hopes he has a lawyer, because she does.