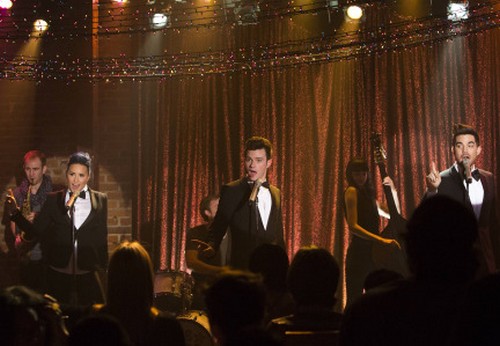 Glee returns to FOX tonight with an all new episode entitled“Trio.”   On tonight’s episode Tina, Blaine and Sam plan a senior lock-in to celebrate their upcoming graduation, but things go awry when Becky joins them. Meanwhile, Elliot finds himself in the middle of Rachel and Santana’s fight.  If you missed last week’s episode, don’t worry your little Gleek hearts, because we recapped the episode for you RIGHT HERE.

On the last episode tensions flared in NYC as Santana auditions and snagged the role of Rachel’s understudy in “Funny Girl,” causing a feud between the roommates. Meanwhile, back in Lima, Tina and Artie competed against each other to be the class valedictorian.

On tonight’s episode as graduation approaches, Tina, Blaine and Sam band together to hold a senior “lock-in” at school, hoping to savor their last chance at hanging out together. But their plans are thwarted when Becky joins unexpectedly. Meanwhile, in New York, Elliot (guest star Adam Lambert) is stuck in the middle between Rachel and Santana’s feud.

RECAP: Will is teaching his class, but he gets interrupted and needs to leave the class and heads to the faculty room with Emma. Becky hears them in the faculty room and checks what’s going on, turns out that she caught Emma and Will getting it on. It cuts to the two of them in Sue’s office; she wants to know what they’re doing. Turns out that Will and Emma want to try and have a child together, their sorry and say it’ll not happen again. The Glee club begin to sing Jumpin’, Jumpin’ by Destiny’s Child. Will says it was amazing, but it’s not right for the nationals. Sam, Tina and Blaine did that as a trio, because they’ve never sang together. Rachel has her own band in order to help her keep her voice sharp, turns out that Rachel will be staying with Eliot since she moved out from Kurt and Santana. Rachel wants to sing a song, but Eliot says how about something more Rock and Roll. Eliot and Rachel begin to sing Barracuda by Heart. Blaine and Sam begin trying on their graduation gowns and caps, to see what they look like. Tina walks in and sees them in their graduation gowns and caps; she begins to cry because she doesn’t want to be split up with them. Tina says that the glue that keeps high school friends together is high school. Blaine wants to do something big and epic to finish of their high school lives, Sam and Tina agree to do it.

Emma tells Will that she went and had a pregnancy test, turns out that she’s negative. Will tells her that they should go to a fertility doctor to figure it out; Sue tells Will that he should try to relax and try to be calm about the situation. Sue makes an announcement about them proving the first annual senior lock in; she tells the students that she’s decided to cancel it. Tina drops to the floor and cries, Blaine and Sam see her bawling her eyes out on the floor. Tina is upset about the lock in being canceled, because graduation is coming soon. Sam and Blaine tell Tina they should have their own lock in, by leaving one of the windows open and entering it later. Santana is trying to get an extension into her hair; Eliot arrives into Kurt and Santana’s place. Santana is talking about how she wants to completely destroy Rachel; Eliot says that he’s only here to pick up her sheet music because she’s staying at his place. Santana calls him a traitor, but he retorts saying he hasn’t known her long enough to be considered one and he needs a roommate for the money. Santana says she’ll help him out with money. Sam, Blaine and Tina sneak into the Glee Club at night for their own lock in, they begin to sing Don’t You Forget about Me by Simple Minds while having the time of their life at the school with no one there. At the end of their song and fun, Becky catches them.

Becky sets up Twister, and is drinking a ton of energy drinks. They ask how she got in and it turns out she snuck into the window also, Becky wants to hang out with the three of them. If they don’t agree to have fun with her, she’ll call the cops. Will is starting to set up the nursery room; Emma sees this and is shocked. Will tells her that they need to calm down and not think too much having a kid, to wait and let it happen on its own. Will begins to sing Danny’s Song. Blaine and Becky are playing Twister, while Sam and Tina have left and have been gone for a while. Blaine is looking for them; he ends up finding Tina and Sam making out. Blaine says that it was their last chance to ruin it, but that they’ve ruined it now; he runs off in disgust.

Rachel is working at the restaurant, she sees Eliot sitting with Santana; Rachel is asked to sing Gloria for the women who’s at the restaurant. Eliot, Rachel and Santana begin to sing Gloria by Van Morrison. Kurt’s watching the entire performance, seeing Rachel and Santana competing with each other the entire time. Rachel and Santana ask Eliot who was better, Eliot says he’s not choosing sides and he says he’ll leave the band until they fix their relationship. Blaine sees Sam and Tina at school the next day; he says that it was selfish of them. Sam and Tina say that they don’t want to become a couple that they want to be a trio. Blaine says they had their chance; he won’t hang out with them.

Santana and Rachel are still fighting with each other, Kurt is getting fed up with what their fighting. Kurt says that Rachel and Santana are out of the band, that he’ll be making a new band with Eliot and that they should check them out at the gig tonight. Rachel ends up going to the bar, Santana appears and they both agree to pretend to be friends for tonight. Kurt declares his old band finished, now he introduces his new band. Kurt and his new band begin to sing The Happening by The Supremes. After they’re done singing the crowd goes wild cheering and clapping for them.

Santana and Rachel are once again talking, Rachel says that she has no other friends who are girls in the city and that Santana is the only one she knows. Rachel doesn’t understand why Santana is trying to take her part, she says it’s because it was an opportunity. Santana is about to leave for work and Rachel leaves for rehearsal. Sam and Tina wait for Blaine in the Glee Club, Blaine admits to being too hard on them and that he only wanted things to go perfect for their lock in night. Blaine says that many things will change in the future, but they’ll always be friends. Will and the rest of the Glee Club arrive, they’ve got one week until nationals. He tells them that they’re ready to take on nationals, except they shouldn’t forget their sun block since they’ll be in Los Angeles. Tina, Sam, Blaine and Arty begin to sing Hold On by Wilson Phillips. At the end Emma tells Will that she’s pregnant.