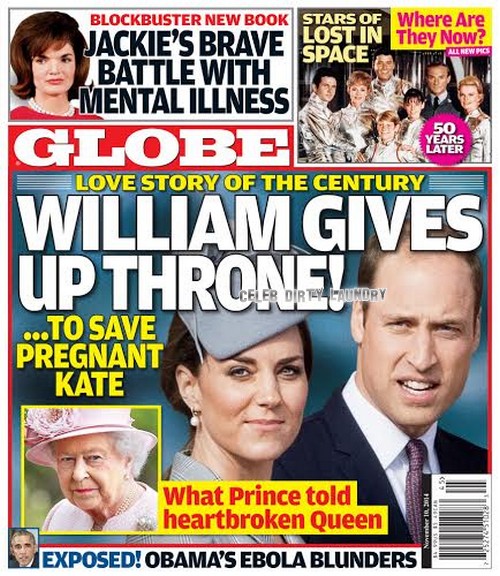 Another day, another Royal Family scandal. In September 2014, the Palace confirmed that Prince William’s wife Kate Middleton was indeed pregnant with baby number two, and rocking a Royal baby bump. Many Royal family observers believe that Queen Elizabeth will hand over her throne to Prince William and his beautiful new family, bypassing his father Prince Charles and his wretched wife Camilla Parker-Bowles. However, according to new reports, Prince William has apparently turned down the throne.

Who on earth would turn down a chance to be the King of England? Well, according to the November 10th edition of GLOBE Magazine, in the love story of the century, Prince William did just that. Prince William told Queen Elizabeth he was giving up being the next King in order to save Kate Middleton. Our friends at GLOBE always have the best inside sources when it comes to the dysfunctional Royal Family. The cover of this week’s magazine reads, “Love Story Of The Century – William Gives Up Throne… To Save Pregnant Kate.” Since Kate became pregnant with her and William’s second child, Camilla Parker-Bowles has really upped the ante and launched a full-blown mental assault on the Duchess of Cambridge. And, it seems to be working, because according to GLOBE William has told his heartbroken Grandmother, Queen Elizabeth, that he must pass on the crown because poor pregnant Kate can’t handle the infighting and tension that comes with upsetting the traditional hierarchy of the Monarchy.

The November 10th cover of GLOBE Magazine also teases a story on Jackie O’s brave battle with mental illness, Obama and his fight against Ebola, and a “Where Are They Now” piece on some of TV’s most iconic characters.

As soon as this week’s edition of GLOBE hits the newsstands, we will be sure to pick up our copy and get you all of the juicy details on the latest Royal family power struggle. So, do you think that Prince William gave up the crown to save Kate Middleton from his power-hungry step-mother, Camilla Parker-Bowles? Will Queen Elizabeth be able to convince Kate and Will to reconsider accepting the throne? Let us know in the comments below!