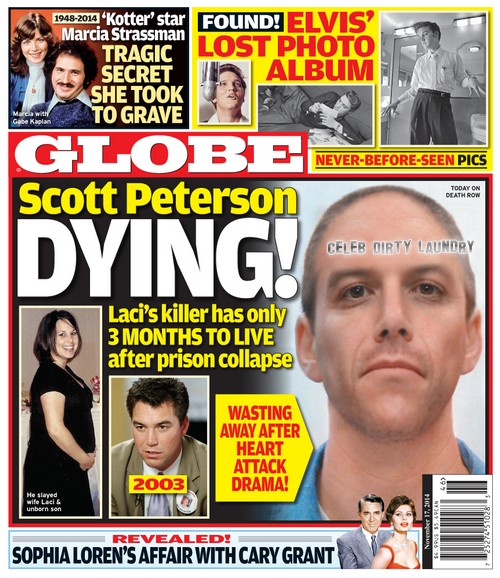 Laci Peterson, eight months pregnant, was reported missing by her husband Scott Peterson on Christmas Eve in 2002 – the case quickly gained a national audience and was followed closely by all major news outlets. As the investigation in to Laci’s disappearance progressed, her husband Scott quickly became the police’s number one suspect. After his mistress came forward and provided the officers on the case with damning evidence, Scott Peterson was arrested and charged with first degree murder and convicted, he currently is sitting on death row in California.

According to the November 17th edition of GLOBE Magazine, Scott Peterson may not live long enough to be lethally injected, and the cold-blooded killer is currently dying on death row. The cover of this week’s GLOBE features a photo of a frail Scott and screams, “Scott Peterson Dying.” GLOBE always manages to get the inside scoop, and the cover goes on to explain, “Laci’s killer only has three months to live after prison collapse. Wasting away after heart attack drama.” Ironically Scott is now only 42 years old – but it seems that nature is taking its course, and one of America’s most hated men is going to die one way or another.

If you are an Elvis Presley fan – then you should head to the newsstands ASAP and pick up this week’s GLOBE Magazine, which has never before seen photos of the iconic singer which were obtained from a lost photo album. You also can get the inside story on Sofia Loren’s affair with Cary Grant, and learn the “tragic secret” that ‘Kotter’ star Marcia Strassman took to the grave.

The November 17th edition of GLOBE Magazine looks like a must read, and if you followed the Peterson case you won’t want to miss it! So, do you think Scott Peterson is getting what he deserves? Or would you rather he lived long enough to be lethally injected like the court ordered? Sound off on the controversial matter in the comments below, and as soon as GLOBE hits the stores we will have more juicy details for you!