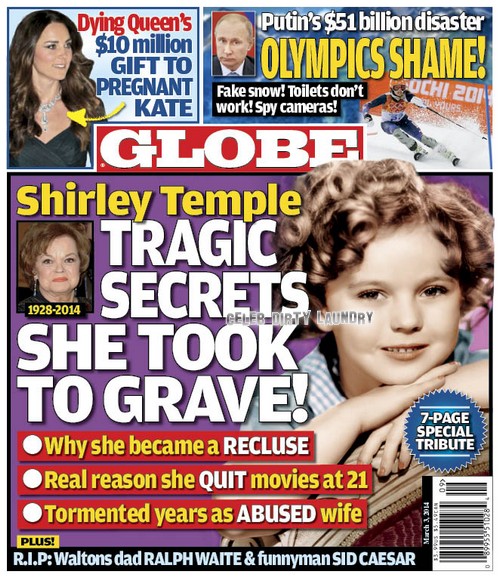 Shirley Temple was 85 years old when she passed away last week, obviously she was at an age where bodies fail so her death couldn’t have surprised too many people. Temple was best known for the series of movies that she made as a child star back in the 30’s. I think everyone has seen her early work and Temple also managed to work as a fairly successful teen actress for awhile. Finally after a string of mediocre flicks Temple announced her retirement from Hollywood in 1950.

It was after she wrapped up her film career that her life became a bit messy. She had a short-lived marriage in the late 40’s and then married Charles Black in 1950. According to the March 3rd print edition of GLOBE Magazine, Temple was an abuse victim during one of her marriages. She spent years tormented by her husband and it is a well-hidden secret that very few knew the details about. Only after her death are we starting to understand what the starlet endured and the drama that for the most part she chose to take to the grave with her.

Also in the March 3rd print edition of GLOBE you can read about Queen Elizabeth’s amazing gift to Kate Middleton. Since Kate has agreed to a makeover and has been allowing the Queen’s official dresser to lengthen her hems and make her look a bit more respectable she will be rewarded greatly. Kate now is allowed to wear various jewels from Elizabeth’s own collection. With million dollar necklaces and beautiful tiaras to play with who needs to show off all that leg anyway?

Have you been following the Sochi Olympics? If so do you think that in many ways they are an epic fail? Does Putin look bad because hotel construction wasn’t completed and even toilets weren’t flushing when people first arrived? GLOBE has more inside details on the mess that welcomed visitors but in the meantime, tell us your thoughts on these games in the comments below!