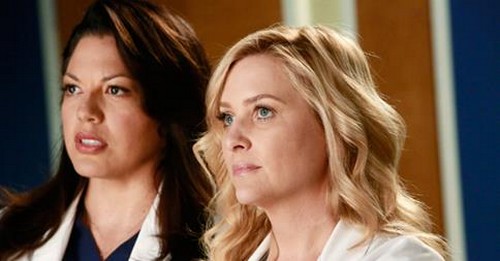 Tonight on ABC Grey’s Anatomy returns with a great all new Thursday September 25, season 11 premiere episode titled “I Must Have Lost it on the Wind.” In the 11th-season opener, Meredith finds her life in chaos both at work and at home. Meanwhile, Callie and Arizona make a choice regarding surrogacy; Amelia discovers a secret; and Bailey and Alex battle for Cristina’s seat on the board.

For those of you who are not familiar with the show, “Grey’s Anatomy” follows the personal and professional lives of a group of doctors at Grey Sloan Memorial Hospital in Seattle as they deal with the well being of their patients and their relationships with each other.

On tonight’s episode with Cristina gone, a new doctor, Maggie Pierce (Kelly McCreary), making the rounds and Derek wanting to move to Washington DC, Meredith struggles to regain a sense of normalcy both at home and in the hospital. Meanwhile, Callie and Arizona come to a decision about surrogacy, Amelia overhears a big secret, Bailey realizes she will have to fight Alex for Cristina’s board seat and a freak accident causes two teenagers to be caught in a very compromising position.

This episode looks like it is going to be a great episode and you won’t want to miss it, so be sure to tune in for our live coverage of ABC’s “Grey’s Anatomy” Season 11 premiere at 9 PM EST! While you wait for our recap hit the comments and let us know what you think about season 11.

Richard heads to an AA meeting, he takes the podium and confesses that he just found out he has a daughter, or he thinks he has a daughter but he isn’t allowed to see her or talk to her and he really wanted to go to the bar and have a drink so he decided to go to AA instead. While he is talking he recognizes someone listening to him at the meeting, it’s Jo.

Owen is on duty rushing around like a mad man. A trauma helicopter is trying to land on the roof, so he and Meredith rush to the roof, along with a new member of the staff Maggie. The wind is so strong and they can get the patient out of the helicopter, while they are struggling their gurney rolls off the roof and crashes in to the street. They finally get their helicopter patient in to the hospital, someone found him lost and unconscious in the desert. He comes to and starts ripping his tubes out. He screams that they needs to find his family and they are still out in the desert and then he starts flatline-ing. Meanwhile, Owen runs outside of the hospital and realizes that the gurney jack-knifed through the roof of an SUV that was parked under the roof, and there are people screaming for help inside.

They realize that the person in the SUV screaming for help is one of their patients Dave, and he is late for his chemo round. And, there is someone sitting on his lap and they don’t have any pants on. Meanwhile in the hospital, Miranda and Jackson are livid when they learn that Cristina gave her shares on the board to Alex.

Owen and his team manage to get Dave and his naked girlfriend out of the SUV after the firefighters come and cut the doors off. Dave’s girlfriend realizes that she is bleeding all over the back of her head an they rush her to head trauma. Dave jokes that the day really can’t get any worse, and then when he is being wheeled in to the hospital the blanket blows off him and he is buck naked. Arizona and Callie are working on Dave and his girlfriend, and his collar bone is broken. His mom shows up and is furious that he was having sex in the parking lot. Dave’s girlfriend has glass embedded in her head, and learns she has to get her head shaved, but she is thrilled because then she and Dave can be bald together.

[9:04:03 PM] Amanda Austin: Owen and Meredith are trying to get the desert patient in to an MRI, Maggie is hounding them to let her take an ECHO test but Meredith keeps blowing her off. The desert survivor keeps rambling about his six year old daughter Lily who is lost in the desert. He says his car broke down and he went to get help and his daughter Lily and her mom got out of the car and wandered off. He panics and says she has been in the desert for three days now, Meredith tells him that he was in the desert for over a month before some one found him, it has been way longer than three days.

Owen is working on a patient and Dr. Webber stops by, he comments that his hands are steady and they should hang out sometime and play Jenga. Jackson already tried to make plans with Owen too, they are all worried about how lonely he is since Cristina left.

Callie and Arizona are all done shavine Dave’s girlfriend Monica’s head and she jokes that they look like alien lovers. Suddenly Monica stops talking and is in a trance, Callie and Monica rush her to head trauma and learn that she has internal bleeding they have to do emergency surgery. Meanwhile, Meredith and her team are working on the desert patients kidneys and have taken one out to clean it. Suddenly he goes in to cardiac arrest (which could have been avoided if Meredith let Maggie o the ECHO), and everyone begins panicking. While they are racing around they lose his kidney, it seems to have disappeared off the table. Maggie and Meredith keep screaming at each other and Owen finally intervenes. One of the interns find the kidney in the sink. After surgery Maggie and Meredith head to the break-room to continue their argument. Afterwards Dr. Webber finds Maggie banging on the vending machine and having a temper tantrum. Maggie cries that she can’t believe Meredith is her sister and she is such a terrible person, she planned on telling Meredith they were related after their shift was over and now she isn’t going to.

Dave, Callie, and Arizona hold vigil around Monica’s bed after her surgery, and she finally wakes up and is going to be okay. Callie is inspired and tells Arizona that they should get a surrogate and have another baby. But, now Arizona isn’t sure because she wants to go back to school and apply for a high-profile fellowship.

Everyone heads to the break-room for a meeting about Cristina’s board seat. Technically Alex has a letter saying that the seat is his. But, bi-laws state that they have to vote for the next board member. Meredith receives news on the desert man’s family, apparently his daughter Lucy and wife are safe and sound, they rush in to his hospital room to see him and he cries tears of disbelief. Afterwards, Meredith hugs Alex and tells him now that Cristina is gone, he has to be “her person.”