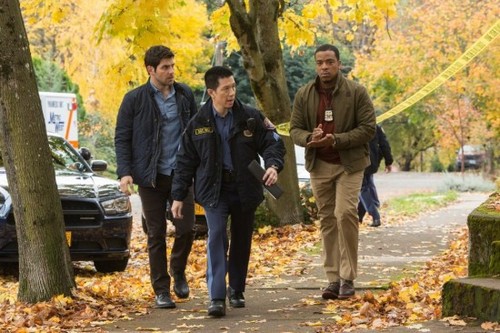 GRIMM returns tonight with a new episode called, “The Good Soldier.”  On tonight’s show Adalind (Claire Coffee) sees hints of what she thinks might be her powers returning.  If you missed the last episode, don’t you worry your little Wesen heart, because we recapped the show for you RIGHT HERE.

On last week’s episode Nick (David Giuntoli) and Hank (Russell Hornsby) were called to the scene of a gang-related homicide. The case escalated as Zuri (guest star Sharon Leal), Hank’s physical therapist, and her brother get caught up in the investigation. Meanwhile, Juliette (Bitsie Tulloch) sought advice from Rosalee (Bree Turner) in dealing with the news that her friend is Wesen. Reggie Lee also starred.

On tonight’s episode Nick (David Giuntoli) and Hank (Russell Hornsby) are called to the gruesome murder of a veteran working in home security. During their investigation, they discover this might be one of several revenge killings regarding a horrifying cover-up involving members of the army and military contractors. On the domestic front, Monroe (Silas Weir Mitchell) accompanies Rosalee (Bree Turner) during her long overdue reunion with her mother and sister. In Europe, Adalind (Claire Coffee) sees hints of what she thinks might be her powers returning. Bitsie Tulloch, Sasha Roiz and Reggie Lee also star.

Frankie Gonzalez confronts Ron Heard in a bar about an incident from that past during which he caused her great pain. He refuses to listen to her but she assures him that she’s “never going away. Next Monroe and Rosalee are discussing a letter from her mother about the anniversary of her father’s death. They agree that a visit to her mother would be a good idea. Ron Heard gets a visitor while on the phone with a friend who doesn’t have his best interests at heart. Frankie has returned, as promised, to exact her revenge on the Heard. Heard throws the girl off of his property but she promises again that she isn’t going away. Ron returns to the house to get his gun, where he is confronted buy an ugly creature who ultimately brings Ron to an untimely death.

Hank and Nick investigate Ron Heard’s homicide, quickly learning that Heard is a decorated war veteran turned security guard with a security system installed in his home, which wasn’t activated during his murder, which they find odd. Husband and wife discuss the upcoming trip to her family’s home, wife tells husband she appreciates his decision to go with her on the trip, then they discuss an appropriate gift to bring. Hank and Nick learn more about Ron Heard, including who his last calls were with just before his murder.

Frankie drops by unexpectedly on Troy Dodge, whom she clearly knows from her time in Iraq. She threatens to reveal his past sins to his wife. Frankie tells him she wants him to call the police, and that she wasn’t leaving until he did. She runs out the front door just before the wife returns from the kitchen.

Hank and Nick return to the VFW Ron Heard visited the night he was murdered. They speak with the barmaid who tells the detectives about a mysterious young woman who visited Ron at the bar. The barmaid says that Ron didn’t look happy to see the girl and that after Ron and the girl left, she found a cocktail napkin with what appeared to be bloodstains on it. Meanwhile, Monroe and Rosalee arrive at her mother’s house. After a pep talk from Monroe, they finally get out of the car and go to the door where they are greeted by Rosalee’s mother and her sister, Dyetta. It’s clear things are tense between Rosalee and Dyetta. The detectives visit the last person who spoke to Ron on the phone, his business associate Jim McCabe. Hank notices a photo of Ron and Artemis Security contractors during their deployment to Iraq. Nick asks McCabe if he recognized the symbols left on the napkin. He says he doesn’t and the detectives leave. Later, the detectives find that one of Ron’s fellow Artemis contractors, Robert, was murdered the week before. Across town, Adalind is dining at a restaurant when more signs of her returning power occur. She doesn’t realize that she is being watched by a man at the bar.

Troy Dodge visits McCabe to discuss Frankie’s recent visit to his home. Troy tells Jim he wants to tell the truth, and that he’s already told his wife Betsy what happened four years before. The man that was spying on Adalind tells Renard on the phone that he believes Adalind’s powers are returning. Renard ends the call when Hank and Nick arrive at his office to discuss the homicide investigation of Ron Heard, which seems to be connected to a murder of one of Heard’s fellow officers just one week before. Later, Monroe and Rosalee have dinner with Rosalee’s mother and Dyetta. Dyetta and Monroe discuss their careers. Dyetta uses the conversation to confront Rosalee over her seven year absence from the family. Rosalee finally tells Dyetta the real reason she didn’t come home when their father died-she was in jail. The dinner ends with Rosalee leaving the table in tears and storming outside, with Monroe following quickly behind her. Monroe calms Rosalee down. Troy and Betsy discuss his written confession, which she has just read. She surprises him by telling him to burn it. She leaves the room after throwing the letter in the fire. Troy then hears Betsy making strange noises from the foyer, he rushes to her aid, but it’s too late, Betsy is gone. Troy grabs the phone to call for help but when he does, he’s electrocuted. He falls to the floor.

Rosalee and Monroe decide to return to the house where they are greeted by her mother who shares a warm hug with her daughter. Dyetta threatens to kill Monroe if he hurts Rosalee. Hank speaks to the Colonel who knew the murdered military contractors. The Colonel tells the detectives of Artemis’ debauchery overseas. He says Artemis was kicked out of Iraq after an Army Specialist named Frankie Gonzalez reported that she was raped by the men. The detectives do a background check on Frankie and learn that she was in Phoenix, the same place Robert was murdered. The detectives are alerted to another homocide, that of Troy Dodge and his wife, Betsy. The toxicology reports come back on the victims, they all had a venom in them that appears to come from a scorpion. Hank visits Zuri to find out about the mysterious scorpion being that is murdering the Artemis men. They learn of an ancient wesen called a mantacour. Nick shares that he has found the confession letter that Troy Dodge threw into the fireplace. It confirms the Colonel’s story about the rape of Frankie Gonzalez. Meanwhile, Jim has a run in with Frankie while in traffic.

Frankie is trying to confront Jim McCabe when Hank and Nick arrive and arrest her. Frankie swears to the detectives that she didn’t kill Robert, Ron, and Troy. Nick tells her they know she’s a mantacour. She proves to them that she isn’t a mantacour by changing to her true form. They ask her if she told anyone else what happened. She says she told the Colonel. Nick and Hank have Frankie call the Colonel, who tells her he knows she’s with the police, but confesses to the crimes anyway. They track him to the VFW.

McCabe arrives at the VFW where the Colonel is waiting, alone. The Colonel tries to strike a deal with McCabe but McCabe baulks. The Colonel tells McCabe that he is the one who killed his friends. As it turns out, both of the men are mantacours. They duke it out in their wesen forms. Meanwhile, Nick and Hank arrive at the VFW, just as McCabe kills the Colonel. McCabe claims self-defense as Hank puts him in cuffs. Before the Colonel dies, he tells Nick, “You can’t arrest him for what he did to Frankie, but you can arrest him for what he did to me.”

Nick and Hank give Frankie a copy of Troy’s confession. She tells them that it’s all she really ever wanted.