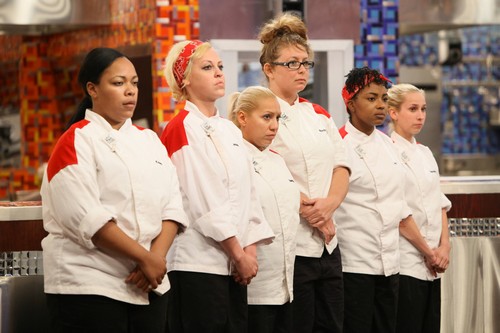 HELL’S KITCHEN returns to FOX tonight for the ninth episode of season 12 called, “12 Chefs Compete.” On this evening’s episode The Top 12 chefs participate in a team challenge, in which they are given 30 minutes to create a meal with surprise ingredients. The winners receive a beachside lunch and volleyball lessons, and the losers are assigned to kitchen duty. Later, the lowest-ranking chefs from each team are pitted against each other.

On last week’s Chef Ramsay announced that HELL’S KITCHEN would be hosting a 160th anniversary party for the Phi Mu sorority. During the first challenge, the Red and Blue teams prepared a southern-inspired menu for the Phi Mu social committee. The team with the most impressive dishes earned an elaborate trip to Las Vegas, while the losing team stayed behind to transform the restaurant for the party. Later, Chef Ramsay put the pressure on the chefs to execute a flawless dinner service, but each of the teams struggled to communicate with each other, and the losing team nominated two of its weakest links to be up for elimination in the all-new “13 Chefs Compete” Bev was sent home.  Did you watch last week’s episode?  If you missed it we have a full and detailed recap, right here for you.

On tonight’s episode In the ultimate adaptability challenge, contestants from the Red and Blue teams are given 30 minutes to shine, as each team member must create an entrée with four surprise ingredients in a hidden dome challenge. Chef Ramsay and VIP guest judge, Chef Michael Cimarusti, will determine which team will be treated to a beachside lunch and volleyball lesson with Kerri Walsh Jennings and which team will stay behind to do the kitchen chores. Later, tensions rise as Chef Ramsay announces it is time for 1:1 performance evaluations. Then, for the first time in HELL’S KITCHEN history, Chef Ramsay pits the lowest-ranking chefs from each team against each other, beginning an emotional elimination round.

Tonight’s episode of Hell’s Kitchen kicks off with Gordon telling all the chefs the night was a “f—-g embarrassment” and he tells them to all “piss off.” Jessica is devastated and won’t stop crying. Melanie is shocked at how emotional she is being. Joy is annoyed that Jessica is making the house all about her and using the fact that she was homeless as an excuse. Joy was homeless too and she doesn’t constantly throw it in everyone’s face.

The next morning the Red Team and the Blue Team head to the kitchen and meet Gordon. He informs them they are all on their own today. There are four domes in front of each team, every time the bell rings they can remove the lid and choose the food of their choice. They have 30 minutes to use the foods they grabbed and make a dish.

Rochelle was the last person to grab from the first dome, and got stuck with a live lobster, and she has no idea how to cook it. Jessica is positive that she can turn the swordfish she grabbed to make something great, little does she know she actually grabbed tuna. Ralph isn’t trying to rush, he keeps intentionally waiting and taking whatever his team leaves behind. He is confident he can put together something great with whatever he gets stuck with, he doesn’t think there is any point in pushing through everyone.

Jessica and Sandra begin feuding because they both grabbed the same dish. Sandra refuses to budge and give up the food, so Jessica finally hands it over and shouts “F—k You!” to Sandra as she pushes past her.

The clock in winding down and the chefs are rushing to complete their dishes. The buzzer goes off and Gordon reveals he has brought in Head Chef Michael Cimarusti to judge their dishes.

Richard and Rochelle share their dishes next, they both wound up with lobster. Chef Michael awards the point to Rochelle. So far the Red Team has 2 points and the Blue Team has zero points.

Jason and Joy both present their sea bass and Chef Michael gives the point to the Blue Team.

Melanie and Gabriel both present their chicken, and Chef Michael gives both of them a point.

Jessica and Anton go head to head with their tune, and Gordon points out that her fish is over-cooked. Chef Michael awards the point to the Blue Team. The Red Team and Blue Team are both tied 3-3.

It all comes down to Scott and Sandra’s duck dishes. Chef Michael tries both dishes and then announces that the winner of the competition is the Red Team.

Chef sends the Red Team off to a resort to enjoy a private beachfront dinner, and volleyball lessons from Olympic Winner Kerry Walsh. They squeal with excitement and rush off to get changed. Gordon informs the Blue Team that they must polish all of the server’s shoes, iron their outfits, dust the shelves, clean the fountain, and numerous other tasks.

The Red Team and Blue Team all collapse after their long days of cleaning and playing volleyball, just as they are falling asleep, Gordon calls them down to the kitchen to do 1-on-1 performance evaluations.

Sandra heads to Gordon’s office first. Gordon informs her that her duck was amazing today, however when she does poorly, she shows that she doesn’t care. He puts her on the spot and asks her whether or not she cares or if she has given up. She promises she will put up more of a fight.

Gabriel heads to Gordon’s office next, followed by Joy. He encourages Joy to believe in herself more. The rest of the members of the teams head to Gordon’s office one by one as he offers them some words of encouragement and tells them what they are doing wrong.

Jessica and Richard have thirty minutes to prepare lobster, skillet fish, and halibut. The loser will be going home. The clock begins and Jessica and Richard begin racing around the kitchen, the Red Team and Blue Team stand to the side and cheer on their teammates.

Jessica and Richard race around for thirty minutes struggling to prepare all three dishes. Jessica present her dishes first, Gordon is happy with two of her dishes, but he says her risotto is over cooked. Next it’s time for Richard to present his dishes to Ramsey, he says Richard’s rice is a little over-cooked.

Overall Gordon says they both did a “pretty good job.” But, one of them has to go home. He announces that the next person leaving Hell’s Kitchen is …