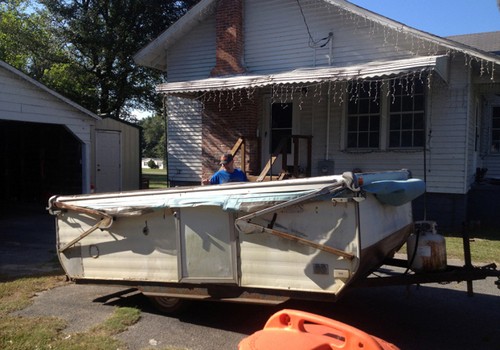 Tonight on TLC their popular and zany reality show HERE COMES HONEY BOO BOO continues with another new episode called, “Hubba Bubba!.”  On tonight’s second episode the RV journey continues with a visit to the seashore for the girls’ first surfing lesson, and concludes with a decadent Southern meal..  Did you watch tonight’s second episode?  We did and we recapped it right here for you.

On tonight’s first episode June and Sugar Bear never had a honeymoon after their Commitment Ceremony, so they decided to make it a family affair and went on a Familymoon. Their RV journey included an Animal Safari, encountering the wild animals, a Children’s museum, and a candy shop.

On tonight’s second episode the RV Familymoon continues as they head to the ocean for the girls’ first surf lesson. Sugar Bear puts the Honey back in Familymoon taking June away for some alone time. Before heading home, the family enjoys a real Southern meal… ordering everything!

Tonight’s episode looks like it is going to be another crazy Thompson family episode and you won’t want to miss it, so be sure to tune in for our live coverage of TLC’s “Here Comes Honey Boo Boo – Hubba Bubba!” at 9:30 PM EST! While you wait for our recap check out a sneak peek of tonight’s episode below!

In this episode, the family wakes up at the RV park. Mama June tries to wake the family up so they can go surfing for the day, but first, Poodle has to go pump out the “crapper.” Mama June says his new name is going to be “Uncle Poo Poo Poodle.” Later, Poodle decides the RV stinks, so he passes out air fresheners. Turns out, nobody’s used the shower since they boarded the RV. Sugar Bear just excited he’s getting some of Mama’s June later on that night. But first, it’s time to surf. Mama June has signed the girls up for surfing lessons. Pumpkin says they were all “scared and excited at the same time.” Mama June cheers the girls on from her comfy beach chair. Suddenly, Mama June thinks she sees a shark, but it’s a false alarm. Honey Boo Boo says that she was “so excited to get out there and surf, kowabunga, dude.” Mama June thinks their first time surfing was a great success.

Next, the family is headed to a motel room on Tybee Island, so Mama June and Sugar Bear can get some “alone time.” Honey Boo Boo thinks that the idea of her parents having “alone time” is boring. The room Sugar Bear has selected is called the Moulin Rouge, complete with a stripper pole and snacks like powdered donuts and cheese. Mama June says the best thing in the room is the snacks, but of course Sugar Bear knows that. He also knows it’s his one way ticket to Mama June’s “heart.” Sugar Bear tells Mama June that he’s ready to get his “heart on” in the heart-shaped bed. Sugar Bear leans in for a kiss but Mama June says she needs to “freshen up.” When she comes out of the bathroom, she finds Sugar Bear in the hot tub ready for “action.”

The next day, the girls quiz Mama June about her night with Sugar Bear in the “fancy motel.” The conversation makes Mama June hungry for some soul food, so they stop in Savannah at Sisters of the New South restaurant, where the family enjoyed their first meal in days that didn’t involve hot dogs. Sugar Bear says his favorite part of the trip was his “alone time” with Mama June.

After the stop for lunch, the family is finally headed back home. Mama June says that the trip was a great experience for the family, but she’s ready to get back home. That night, the family finally arrives at home. Mama June can’t wait to get out of the RV and use the bathroom. The girls are all excited to be back in their own beds. While the family is exhausted, they had a great time together. Before bed though, Mama June fixes hot dogs for everyone.