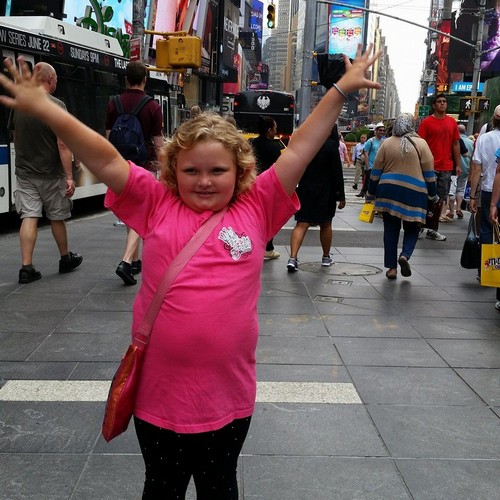 For those who are new to the show, Here Comes Honey Boo Boo is about Alana, who was six years old when the first season was filmed, the show features her stay-at-home mother, June “Mama June” Shannon; her father, Mike “Sugar Bear” Thompson, a chalk miner; and her three sisters: Lauryn “Pumpkin” Shannon, Jessica “Chubbs” Shannon, and Anna “Chickadee” Shannon (12, 15, and 17 years old, respectively, in the first season). Anna Shannon gave birth to a daughter, Kaitlyn Shannon, in the first season finale.

On tonight’s episode nothing can boost June’s spirits on her birthday as she tries to cope with an empty-nest when Anna and Kaitlyn decide to move out. Extra time allows her to work at the bakery, leaving Sugar Bear alone to become a domestic housewife.

Tonight’s episode looks like it is going to be another crazy Thompson family episode and you won’t want to miss it, so be sure to tune in for our live coverage of TLC’s “3 Generations & 1 Pork Rind” at 9:00 PM EST!

Here Comes Honey Boo Boo takes off on another season. In the season premiere, the ladies of the Thompson household gather around to chat about Anna’s wedding plans after getting engaged to Michael last season. According to Anna, she has some very expensive plans for her wedding. Shocked by Anna’s generous spending plans, June asks Anna to wear her wedding dress. Anna declines but humors June by trying on the camouflage print wedding gown.

Anna reveals big news this episode as she tells June that her and Kaitlyn are moving out with her fiancé Michael. Anna talks about the place they found that is 30 minutes away. After a bit of denial, June expresses her concerns that Anna is not financially stable enough to be on her own. While sitting on the couch, Anna, June, and Kaitlyn have a tender family moment sharing a pork rind—“three generations and 1 pork rind,” says June.

For June’s 34th birthday, the family decides to plan her a surprise tropical-themed party to cheer her up. Naturally, the girls show off their twerking skills as the party plans come together. While June’s out of the house, everyone contributes to decorating the house with streamers, leis, and other tropical décor. And of course, what party is complete without a meat sculpture and life-size cardboard cutout of Mario Lopez? Upon arriving home, June is happy to see her surprise party. She was especially touched by Anna and Kaitlyn’s gift of clay prints.

The next day is moving day for Anna and Kaitlyn. June continues to be in denial but she admits to feeling nervous for Anna. June refuses to help Anna move and even jokingly warns Michael about returning Anna after 90 days. The family is also upset about not being able to see Kaitlyn grow.

Feeling bored and lonely in a now quiet home, June decides to help her sister at the bakery. During her first two days, June learns her way around the bakery but struggles with taking orders from her sister. Her training didn’t exactly run smoothly as June was either making a mess or eating on the job the whole way through.

Meanwhile, Mike “Sugar Bear” was putting on oven mitts and taking the role of Mr. Mom. He helped the kids to school, did housework, and enjoyed his time at home. It was only until he had to give Lauryn boy advice did he realize that his job in the home never ends. At the end of the episode, June and Mike agree that June’s skills are best utilized at home where she is happiest.