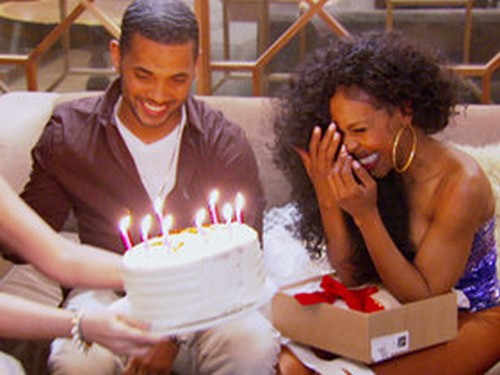 On last week’s episode Tony was suspicious about Drea’s fiancé and when Shanna threw a poker party at her home, Tony seized the opportunity to air his grievances. Things got hot and heavy as both Mayte and Jessica had new men in their lives.

On tonight’s episode at Drea’s birthday party, the women grill her about getting a pre-nup, causing Drea to meltdown and Brian to explode. Shanna shares her private text messages form Jessica, which threaten to tear the sisterhood apart.

Andrea is excited about getting married, but her friends are a little bit worried that she’s rushing into things. Her friend Nicole offered to host the wedding at her house and yet when Andrea came over to start planning – Nicole kept asking the same old questions. She wanted to know if Andrea was sure and had asked if the wedding could maybe be delayed.

Andrea is having none of that though. She wants to marry her boyfriend and they’ve both agreed that divorce will not be an option for them. After six months together, she feels like she knows him well enough to take the plunge. Even if they’re getting married on “cursed” ground. Nicole’s neighborhood does have a reputation. Everyone that’s gotten married and lived in the area has also gotten divorced. It’s well known fact that Andrea didn’t learn about until the very last minute.

Later the ladies went out to celebrate Andrea’s engagement. And when they started in with the questions; she revealed that she hasn’t nor will she in the future sign a pre-nup. She tried to explain that most of her money is legally bound up in a trust, but her friends still want that pre-nup. Just as extra security if nothing else.

Jessica really felt bad about it and given a second chance she again asked Andrea to re-think a pre-nup. She went shoe shopping with Andrea and Shamicka. And once they hit the store she started to fire off questions. As a result Andrea felt like it was her relationship itself that was being questioned.

She was tired of everyone having opinion so she said that Brian has been through so much with her that she wouldn’t even if care if he took her money. According to her, he would have deserved it. And because she started to cry – Jessica backed off. She knew better than to push her friend past that limit.

No one wants to hear doubts about their new relationship being spoken of derogatively and Jessica figured that out for herself when the other two ladies started in on her “thing” with Austin. It ticked Jessica off and she ran running with her complaints to Shanna. She felt Shanna was cool enough to be fun and hang out with. And that’s why she wasn’t afraid to trade stories.

However Shanna is an instigator.

Andrea is throwing a 70s theme birthday bash. It’s a big to do and all her friends (both old and new) are invited including Shanna. As the party got underway, many of Andrea’s friends realized something odd. They noticed how Brian wasn’t in costume. Apparently, Andrea’s fiancée didn’t think he should trouble himself by wearing a 70s theme costume for his future bride’s Fortieth birthday party. So one of Andrea’s friends called him out it.

Tony has been a part of Andrea’s life for over 20 years and all he wanted to do was suss out Brian. No one really knows him outside of Andrea and her friends would be a lot less concerned if they could figure him out. And what Tony learned from their encounter was that Brian is perhaps a tad immature.

He didn’t reassure anyone by trying to call dibs on Andrea and Andrea saw what was going on between the guys and thought to escape the drama by hanging out with her girls. Though she didn’t appreciate her time with them either. Shanna brought up concerns, framing it like everyone was speaking behind her back, and even mentioned if this marriage could be a mid-life crisis.

That was the tipping point for Andrea. She was riled up and went over to Tony to tell him that she’s getting married and that’s that. Brian and Tony started trading insults on who Andrea belongs to (like whose bitch is she?) and then Brian tried to attack the other man. It took several people to get Brian to calm down (his fiancée included), but by time the guys were in the same room again – everything was ruined.

Andrea didn’t want to continue with her party. It took some convincing to get her to even stay and thankfully her friends managed to turn it all around.

After she got her gift from Brian – a new Benz – she was back in a happy mood. And her friends helped out by playing in birthday cake. They were running around hitting everyone in the face with some cake and basically having some childish fun. Yet Jessica didn’t like it when Shanna put cake in her face. She got upset and told Shanna off which thereby ended their burgeoning sisterhood.

Why did it end? The answer is this when Shanna felt insulted by the way Jessica reacted at the party she then used texts Jessica had sent her to take the other woman down like the true instigator she is.

Everyone was back to being in a good mood when the part was over. Andrea had eventually made up with Tony and she forgave her friends for their comments. So some of the ladies went to Shanna’s house for a fun cooking lesson thinking all the drama was behind them.

Turns out they jumped the gun. Shanna told them about Jessica’s texts. She showed them the messages that said “white girls and black girls don’t mix” and the second text that said “Shamika was a hood rat”.

Shanna threw Jessica to the lions and she did it because she was offended by the way Jessica didn’t want to play with her.