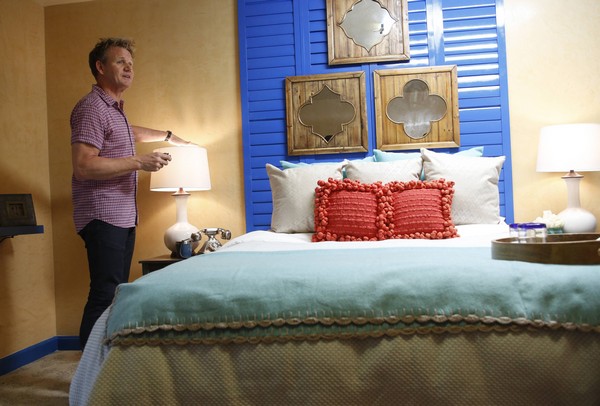 HOTEL HELL returns to FOX tonight for the premiere episode of season 2 called, “Meson de Mesilla.” In the Season 2 premiere, Ramsay checks into a New Mexico hotel that’s run by an owner who’s more interested in singing than in managing the property.

For those of you not familiar with the show, Gordon Ramsay is back and hitting the road to fix some of America’s most horrendous hotels, troubled inns and struggling resorts, many of which are on the brink of closure. Ramsay will travel to locations including Applegate, OR; Las Cruces, NM; Longview, WA; Murphys, CA; Pipestone, MN; Starkville, MS; West Dover, VT; and Woodbury, CT.

On tonight’s episode, in the searing heat of New Mexico, Gordon Ramsay checks in to the Meson De Mesilla, a place that looks more like a penitentiary than a luxury boutique hotel. On arrival, he is asked to sign a waiver to promise he won’t damage the walls, and things go quickly downhill from there. He meets the hotel’s owner, Cali Szczawinski, and soon discovers that she’s more interested in singing than managing the hotel – a lot more interested. In fact, she seems to think she’s Cher. Ramsay wishes he could turn back time, and reroute his flight to anywhere other than Las Cruces. Can he get this owner to focus more on running her hotel and keeping up his changes and less on her performances?

RECAP: The 14 bedroom Meson De Mesilla offers up an unpleasant surprise, the owner, Cali, who thinks she sings like Cher. They only serve Tuscan food and the chefs don’t know how to cook it. Cali thinks she sings well and is in demand by her customers. Two months ago, Cali hired Zan as her General Manager. Zan is Mitzi’s husband, she has worked for Cali since she bought the restaurant. Hotel bookings have falling to all time low and is on the verge of closing. Cali knows she needs Gordon’s help badly.

Gordon arrives at the hotel and is immediately asked to sign a waiver stating that he will not damage the Venetian plaster. Gordon is surprised to see that most of the decor is beige, Cali’s favorite color. Gordon meets Cali and says to her that he is surprised that she is not wearing beige. Gordon then says that he did not sign the waiver and Cali’s explains that the plaster costs a lot of money to replace and guests who damage it should pay for it.

Gordon sits down with Cali and finds out that she has spent a lot of money on remodeling the hotel and only has $70,000.00 left to her name.

Gordon is confused by the hotel and is keen to meet the General Manager and find out why he is letting it fail. Zan tells Gordon that the major problem is that Cali is too controlling. Gordon sits down with Zan and orders some food, it is all Tuscan. Cali thinks her food is really good, Gordon turns the first thing away and tells the waitress it tastes like vomit. Next is the lamb, there is fat all around it and it is tough. Mitzi gives Gordon an earful and tells him that Cali is the problem, she is brass and rude. Gordon finds out that the New Zealand lamb was previously frozen. All of a sudden, Cali starts to sing, the guests are shocked, Gordon tries to fight back laughing; she sings so horribly. Gordon walks around and speaks to the guests, they all agree the food is terrible and so is Cali’s singing.

Gordon goes in the back of the kitchen and finds David, he has no experience and no opinion about the bad food. Gordon then goes to speak to the bartender and finds out that Cali is going to sing again, the same songs she did to the other clients.

Gordon meets with Zan, Cali and the head chef; Zan blames Cali for everything. Cali and Zan go off on each other. Zan apparently told the staff that Cali would no longer be there and continually bad mouthed her. Gordon tells Zan off, Cali then fires Zan. Mitzi then walks out, she quits and calls Cali a bitch; the two leave together.

Gordon takes a drive in town and finds David from the Meson kitchen outside in the city and he owns a food truck that he runs part time. Gordon tries some of his food and finds it is amazing. Gordon thinks it is such a shame that Meson doesn’t take advantage of the local food. Gordon brings some of the guests to tell Cali what they think of her hotel; people don’t like the cleaning agreement, they don’t like that the pool is dirty, the don’t like her singing, they think she doesn’t care about her guests and one guy offers to pay her $100 not to sing. Cali doesn’t agree, she thinks that a lot of people want her to sing. Gordon then introduces Cali to a lady who runs a travel magazine and she tells Cali that her business is not doing well and none of the guests want to return to the hotel.

Gordon tells Cali that she has to make the guests number one and no longer herself.

Overnight, Gordon’s team creates a stunning transformation. The rooms, the pool and the front desk have all been changed. There is now a new breakfast buffet with the breakfast chef, David.

Cali is questioning the changes, she doesn’t like the linen tablecloths and is concerned about all the new work her and her staff are going to have to do. Gordon returns and brings Cali out to the trash and tells her to concentrate on her customers and stop thinking about herself or he is going to put back her old crap and remove all the new furniture. Awkward! Cali tells Gordon that she is greatful and sorry. Gordon tells Cali the truth about her singing, that she is no good and should just give it up.

Gordon organizes a pool party and the guests are all happy – they really like the changes. Gordon introduces Cali to a man named Jeff, he is a former inkeeper of the year. Jeff and Cali talk, Gordon starts to pack his things.

It is the end of a long week at Meson de Mesilla and Gordon tells Cali not to sing ever again, in fact, he put her micophone in a block of ice and wants her to remember that her guests are the stars and not her.

Update, after Gordon left the restaurant everything is continuing to go well at Meson de Mesilla and bookings have increased.