Imagine Dragons Into The Night Tour Rocked The House, With Appearances By X Ambassadors And The Naked And Famous – CDL Review 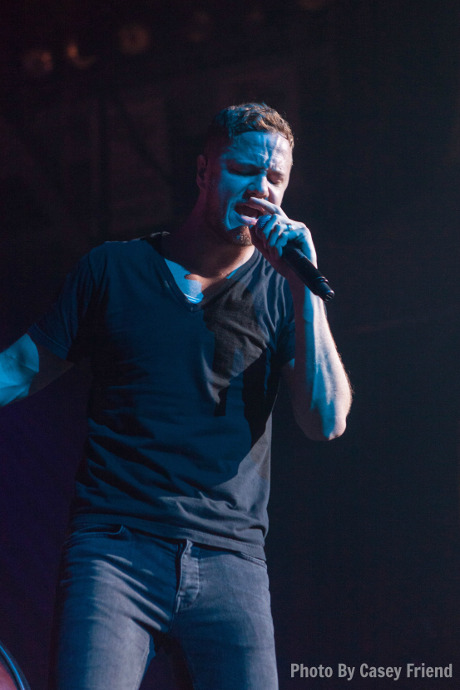 Imagine Dragons totally rocked the stage when CDL attended the band’s Seattle show at the Key Arena. Having seen the band’s many television performances, including their recent appearance on Saturday Night Live, we were expecting a good show. But we were surprised with an even better concert, one so full of energy and awesomeness that we’ve officially turned into Dragon Groupies! X Ambassadors and The Naked and Famous — an up and coming band from New Zealand — opened the concert and did an amazing job getting the crowd pumped up for the night’s main act.

ID ran onto the stage with much enthusiasm and their entire set lasted for about an hour and a half. The high energy from powerhouse lead vocalist and percussionist Dan Reynolds kept the crowd going from start to finish — and his band mates, Ben McKee, Wayne “Wing” Sermon, and Daniel Platzman, delivered enthusiastic performances as well. They played their hit songs, including “Radioactive” and “Demons,” as well as “It’s Time,” a track that quickly integrated itself into the hearts of so many people when it was first released back in 2012.

Overall, the Into the Night Tour was great fun and, if you have tickets to any of this band’s upcoming performances, get ready for a night of great music that’ll have your bones and lungs throbbing to the beat of their trademark drums! We’re totally on board with this band and hope they continue to bask in the success they — and their music! — so rightly deserve.

Imagine Dragons’ debut album Night Visions on KIDinaKORNER/Interscope has been certified platinum by the RIAA. The album arrived on the Billboard Top 200 at #2 with the best first-week sales for a full-length debut by a new rock band in over six years. The album has been propelled by the amazing success of the 2x platinum selling single, “It’s Time” and the 6x platinum follow-up “Radioactive.” The current single, “Demons” has sold over 1.3 million copies.

Disclaimer: CDL was provided with tickets to this concert; however, our opinions and comments are solely our own and this article is in no way sponsored by any outside entity.