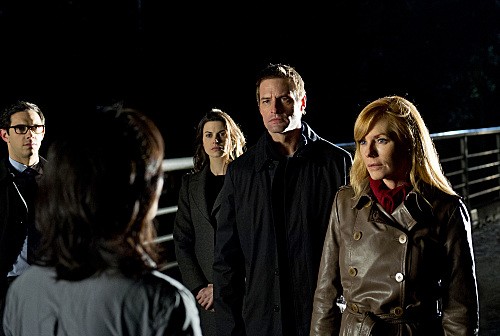 Tonight on CBS their new action thriller INTELLIGENCE airs with it’s pilot episode.  The show stars Josh Holloway as a high-tech intelligence operative enhanced with a super-computer microchip in his brain.  With this implant, Gabriel is the first human ever to be connected directly into the global information grid and have complete access to Internet, WiFi, telephone and satellite data.

He can hack into any data center and access key intel in the fight to protect the United States from its enemies. Leading the elite government cyber-security agency created to support him is Director Lillian Strand, a straightforward and efficient boss who oversees the unit’s missions. Strand assigns Riley Neal, a Secret Service agent, to protect Gabriel from outside threats, as well as from his appetite for reckless, unpredictable behavior and disregard for protocol. Also on the team is Chris Jameson, a resourceful federal investigator. The brains behind the design of the chip is Dr. Shenendoah Cassidy, whose son, Nelson, is jealous of Gabriel’s prominent place in his father’s life. As the first supercomputer with a beating heart, Gabriel is the most valuable piece of technology the country has ever created and is the U.S.’s secret weapon.

On tonight’s show Gabriel and Riley must rescue the kidnapped member of CyberCom who invented the chip implanted in Gabriel’s brain before the top-secret technology falls into the wrong hands. Meanwhile, Gabriel takes advantage of his chip to search for his wife who disappeared years ago.

Tonight’s episode looks like it is going to be great and you won’t want to miss it, so be sure to tune in for our live coverage of ABC’s Intelligence premiere at 9:00 PM EST! While you wait for our recap hit the comments and let us know how excited are you for the premiere of Intelligence.  Also, check out a sneak peek of tonight’s episode below!

The season premiere of CBS’s new series Intelligence opens with Gabriel standing outside staring at a large satellite, no one is around, but he can hear voices. He says “Amelia, where are you?” He appears to be having some sort of flashback of a shooting. Two men in a jeep pull up to Gabriel with guns, and haul him off to a cell. They want to know why he was “trespassing on government property.” Gabriel is able to disarm the security code without ever touching it, and escapes from the prison. Dozens of men are chasing him into the woods and shooting at him. He comes to a cliff, he is trapped, he has no choice but to jump over the edge and drop several feet into a creek.

Dr. Shenandoah Cassidy is home feeding his cat, when armed men in masks enter his house and start barking orders at him in a foreign language.

Lillian Strand is in her office and Riley pays her a visit. Lillian has called her in to offer her a job. She gives her a tour of the building and fills her in on “Clockwork,” a human computer, and an “advanced intelligence agent.” She leads Riley into an exam room where Gabriel is lying on an exam table. Amos, the computer tech, is checking him for computer viruses. Riley isn’t a fan of Gabriel, she tells Lillian “whatever the job is, she is going to have to find somebody else.” Lillian chases after Riley when she storms out. Lillian says that she wants Riley to protect Gabriel.

Lillian heads back inside to scold Gabriel. She is still upset that he almost blew his cover in the Himalayas because she sent him there to plant a virus, and instead he went looking for his wife Amelia. She reminds him that Amelia turned against them, and she is dead now. It has been five years since Amelia disappeared/died and Gabriel needs to “move on.” Gabriel doesn’t want Riley to “babysit her.” Lillian reveals that she has been protecting the president and his children for years and she is the best for the job.

A man enter’s Lillian’s office and interrupts their talk. He says that one of their men have been kidnapped, a man named Dr. Cassidy. Lillian heads to her tech room and shows her team a grainy video of Dr. Cassidy being kidnapped by masked men. Lillian wants Amos to go to Cassidy’s house and make sure his “computers haven’t been compromised.”

Riley and Gabriel head out to Cassidy’s house to investigate the kidnapping. Gabriel finds Cassidy’s pocket recorder in his house, he recorded something the kidnapper’s said. “Bring the safe.”

Dr. Cassidy is in a warehouse with his kidnappers, they are holding a tiny microchip he created. After he created the microchip that was placed in Gabriel’s head, he made another one. And, now the Chinese have it. They can create their own human computer. The Chinese have set up a make-shift surgeon’s room for Cassidy, they want him to implant the chip in one of their men.

Gabriel’s son Nelson reveals to Gabriel, Riley, and the team that his Dad made a second chip.

The Chinese tell Cassidy that if he doesn’t perform the surgery they will kill either Gabriel or Nelson.

They bring Nelson back to the office so Lillian can interrogate him about his father’s new chip. Nelson reveals that the new chip that the Chinese have is stronger and better than the one that they put in Gabriel. Lillian accuses him of selling the chip to the Chinese to get revenge because he is jealous that his father placed the first chip in Gabriel and not him. Nelson denies her accusations.

Lillian’s team pulls a partial plate number off from the van that was used to kidnap Cassidy. They head out to Chinatown to the last known address of the van. Gabriel and Riley locate the van in an alley. They find Cassidy’s glasses in the back of the van. A group of Chinese men catch them going through the van and open fire, Riley takes a bullet in the arm protecting Gabriel. They run into a paint-ball tournament inside a building. Amos is able to upload infrared via satellite to Gabriel and he uses it take out all of the Chinese men shooting at them. Reinforcements arrive. Riley gets checked out by the ambulance and she is okay, just a flesh wound.

Cassidy has completed the surgery, he placed the chip in a Chinese woman. She isn’t waking up though, Cassidy warns his captors that the chip he inserted has never been tested before and she may never wake up. The Chinese aren’t happy with him.

Lillian places Gabriel and Riley in a safe-house. Gabriel isn’t happy. Lillian is scared that the Chinese are going to capture Gabriel and steal the chip out of him. He obviously isn’t thinking clearly because he is too close to Cassidy. Gabriel storms up to bed. Lillian confides in Riley that Amelia his wife is a traitor. Riley doesn’t buy it, if Lillian truly thought Amelia was a traitor she wouldn’t have put the chip in her husband.

Riley wakes up the next morning, and finds Gabriel wandering around downstairs. He confesses that he is “cyber rendering,” he can create still frames in his mind and walk through them. He is looking at still-frames of Cassidy staring into the van when he was kidnapped. He is convinced that Amos (Cassidy’s computer tech) orchestrated the Chinese kidnapping.

Riley and Gabriel rush out of the house to find Amos. He has found them though. He is standing outside. And he has brought the Chinese with him. They want Gabriel since the chip they stole and inserted into a woman is not working.

Lillian is visiting a Chinese woman in a secluded park. She tells the woman that her highest ranking officer, Jin Kong, is responsible for the kidnapping. She asks here where Jin Kong has taken Gabriel and Riley.

Gabriel and Riley are in a prison cell together. Gabriel is tending to Riley’s flesh wound. Riley confesses to Gabriel that her sealed juvenile file that he found on her was for manslaughter. Her mother’s boyfriend was not a good guy, he abused them for five years, and one day she finally fought back. Chinese rush into the room and take Gabriel, leaving Riley alone in the cell. They drag him to the surgery room, They want Cassidy to remove the chip from Gabriel’s head. Gabriel fakes a seizure, and manages to overpower the Chinese men in the surgery room.

Amos pays Riley a visit in her prison cell. She renders him unconscious, and tries to escape, but Jin Kong appears with a gun. He takes her prisoner again, and radios Gabriel and reveals he has taken her prisoner. Gabriel rushes to her aid. Gabriel distracts Jin Kong while Cassidy shoots him.

Lillian, Riley, and Gabriel head back to the secluded park to “make a trade.” They hand Jin Kong over to the Chinese woman Lillian met earlier. In exchange for Jin Kong, the Chinese woman gives them information. She says Amelia is still alive, the Pakistanis have video surveillance of her that was taken less than three months ago.