BY Annemarie LeBlanc on May 19, 2014 | Comments: one comment
Related : Dancing With the stars, DWTS Videos, James Maslow, Reality TV, Television 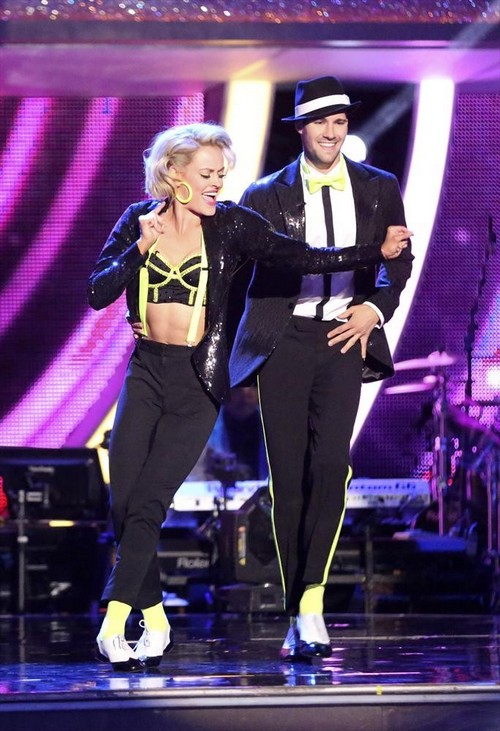 Singer and actor James Maslow danced a Tango for his first dance, on tonight’s season 18 episode 10 of Dancing with the Stars with Peta Murgatroyd for their DWTS finale.  The dancers performed two dances tonight and if you missed James’s Freestyle we have the video right here for you. Tonight was their chance to impress the judges, Len Goodman, Bruno Tonioli and Carrie Ann Inaba.  Four couples remain in the competition, but only one couple can take home the Mirrorball trophy.  If you missed tonight’s show you can read a full and detailed recap, right here.

After nine weeks of competitive dancing spanning a variety of styles from the Cha Cha to the Foxtrot to the Viennese Waltz and beyond, Amy Purdy & Derek Hough, Meryl Davis & Maksim Chmerkovskiy, Candace Cameron Bure & Mark Ballas, and James Maslow & Peta Murgatroyd remain in the competition, but only one couple will be crowned champion.

On last episode James performed a Rumba and Carrie-Ann loved it saying, :  “My contacts got a little foggy.  The Rumba is the sexiest dance.  You did not disappoint because your dancing was totally on par, it was well rehearsed. Its the determination and effort you put in.  I think you are the smartest competitor we have.”   They scored James a 36/40.

James Maslow and professional dancer Peta Murgatroyd: dancing a Tango dance. James has been getting ready for his dance tonight.  James tweeted, “Last day of #DWTS rehearsal with @PetaMurgatroyd…crazy. Looking forward to Monday and Tuesday though!”

Judge’s comments: Len: “Sharp as a razor, clean as a whistle.  You came out and you gave it your all and that is what we expected.”  Bruno: “Dominant, passionate you really want it badly.  Don’t you? and you got a great kiss from her too. I thought you were going to kill her in the good way.”  Carrie Ann: “I have to say you have to be careful you are a bit uptight, you have to breath.  But I liked it.”

Watch the video below and let us know what you think? If you missed any of the performances tonight, you can see all the videos, right here.  Do you think James did enough to avoid elimination next week?  Sound out in the comments and let us know your thoughts?