Jane Seymour Shows Off Her Bikini Body At 62 (PHOTO) 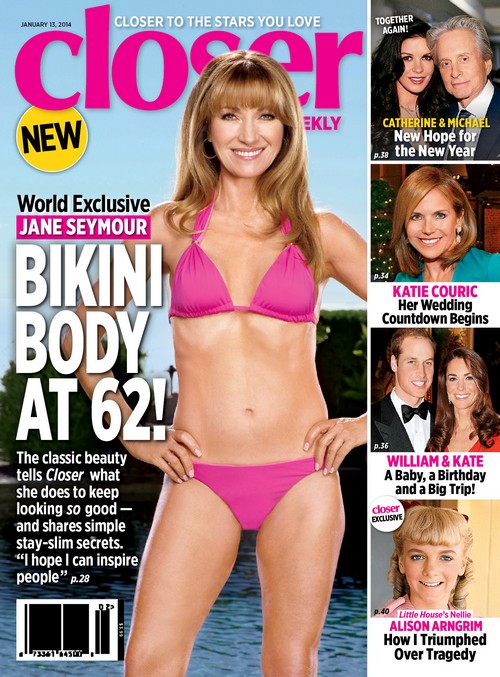 Jane Seymour covers the latest issue of Closer Weekly, revealing her bikini body at the age of 62. She proves that you don’t need to be in your 20s or 30s to sport a great body, which should be inspiration for everyone around her age.

In the accompanying interview, Jane reveals her secrets to staying so slim, how she manages to keep the excess weight off, and how she gained those abs. She reveals that she wants to ‘inspire people‘ to do the same, no matter their profession, weight, or age.

Closer also has a feature on Michael Douglas and Catherine Zeta-Jones, who have reunited over New Years. Now, it’s only a question of whether they will stay together over the next few months, or whether they will decide that they are incompatible and separate permanently.

There’s also a wedding countdown for Katie Couric, as well as a story on Prince William and Kate Middleton‘s first major birthday celebration since the birth of Prince George. They are reportedly planning to travel for their first major tour since George’s birth later in 2014, but it’s likely George won’t accompany them. Toting a screaming baby would be difficult enough, but they’ll have many foreign dignitaries to visit and many stops to make, and I’m sure traveling at such a pace for a young baby isn’t recommended.

Finally, Little House star Alison Arngrim gives an exclusive interview to Closer on how she ‘triumphed over tragedy‘.

What do you guys think of Jane Seymour’s body and Closer’s other stories? Let us know your thoughts in the comments below.