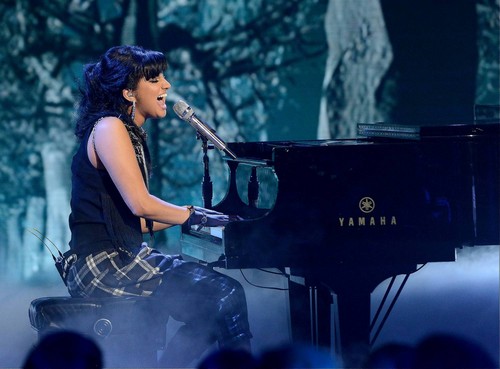 JENA IRENE sang, “Clarity”  by Zedd feat Foxes for her song choice for the “Top 10 Sings Top 10” – themed performance show tonight.   The Top 10 finalist’s song selections had to be a Top 10 song from 2010 to the present.  Did you watch tonight’s performance show?  Just in case you missed tonight’s show we have you covered and you can read our full and detailed recap here!

On last week’s episode Jena sang “Decode” by Paramore and Jennifer Lopez loved her rendition saying, “I don’t know what you were doing in the bottom three last week, you have one of the best voices here, you give great performances. American get on board!”

Judges comments on her rendition of “Clarity:“  Harry – “I was really interested to see how you were going to do it, it seems like that might be your wheelhouse.  I could really see you succeeding in that.  Like you said there hasn’t been a lot of electronic music on here, I’m beginning to see who you are as an artist.  I think there’s not a whole lot to that tune, but I think you did a good job with it and I enjoyed it.  I’d like to hear you do more of it.  I felt like I was in Ultra.”  Keith – “That’s the best performance of the night so far, easily.  You came out, it’s not just about moving around, it’s about looking comfortable doing it.  You changed the melody at times-that’s how you make it your own.”  Jennifer – “I love you singing that song, it’s perfect for you.  I wish it was longer so we could have got the crowd to jump.  When you are running around the stage, you gotta hole the middle.  If you’re kinda sideways it almost feels like you are unsure at times.  If you go to a concert you are right in the middle of the stage.  It was a great job!”

On the next LIVE results show airing Thursday,March 20, tune in to find out who will be sent home. Additionally, international superstar andAMERICAN IDOL XIII judge Jennifer Lopez will perform her new single, “I Luh Ya Papi,” and pop rock band Royal Teeth also will perform their breakout single, “Wild.”