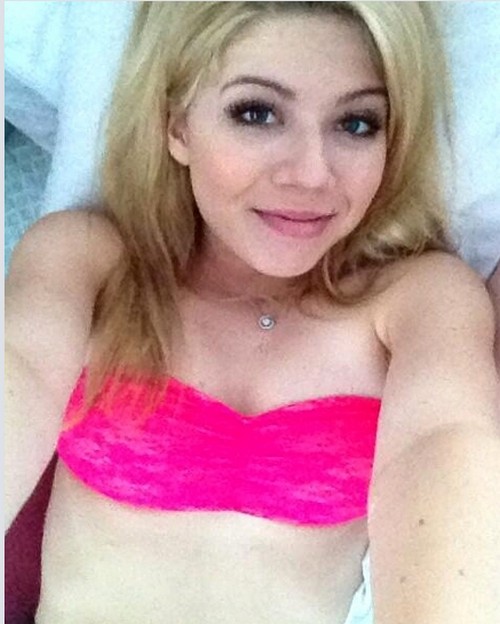 iCarly alum Jennette McCurdy was in the news this week, and not for her Nickelodeon series Sam and Cat, in which she stars alongside Ariana Grande. Jennette recently appeared on a podcast titled “You Made It Weird,” which none of us ever would have known existed except for the fact that she dished on her bizarre relationship with NBA player Andre Drummond.

On the podcast McCurdy mocked Andre Drummond, and made fun of the way he knelt on one knee and asked her to be his girlfriend. She even went on to say the professional basketball player was a “bad kisser.”

In a shocking turn of events, someone leaked scandalous pictures of the Nickelodeon star on Twitter, which instantly went viral. Although Jennette McCurdy isn’t completely nude, she might as well be in the sexy, barely-there lingerie. Her breasts are popping out of her bra in one photo, and in other photo she is crawling on her hands and knees and showing off her thong.

Although Andre Drummond is denying he leaked the photos, no one is buying it. A Nickelodeon star broke your heart, mocked you, and told the world you suck at kissing- making you the laughing stock of the internet, and you aren’t going to retaliate?

What is interesting though, is if Andre really did leak Jennette McCurdy’s nudes, then she wasn’t exactly truthful when she made it sound like their short lived relationship was completely one-sided. Obviously she liked Andre a little bit, if she was willing to send him scandalous photos that could potentially be leaked on Twitter and kill her Nickelodeon career, right?