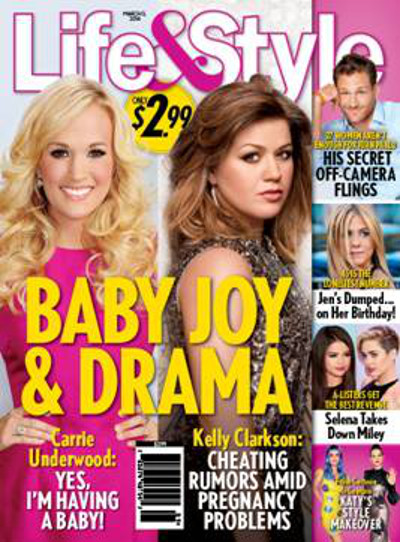 Kelly Clarkson is going through a pretty unenviable time right now. She was overjoyed to marry Brandon Blackstock last October and I think even happier to announce her pregnancy a few weeks later. Then came the allegations by not one but two different women that they had hooked up with Brandon shortly before his wedding. One of them even insinuated that he could be the father of her unborn child. In December, Kelly publicly shot down the rumors but you have to wonder what kind of toll they have taken on an already hormonal pregnant woman.

According to the March 3rd print edition of Life & Style Magazine, just because things have quieted down it doesn’t mean that all is well. Kelly has struggled through serious bouts of morning sickness and other pregnancy complications and trust is clearly a problem. She may have defended her husband but that doesn’t necessarily mean that she trusts or believes him. Speaking of female singers, Carrie Underwood is rumored to finally be ready to start a family of her own. She convinced her husband to back burner babies for awhile so that she could focus on her tour and then she did NBC’s The Sound of Music, leaving no time to even consider a pregnancy. But according to Life & Style she and Mike have told family members that this is going to be their year for a baby.

Jennifer Aniston recently celebrated her 45th birthday but we’re hearing that things didn’t go as smoothly as she would have liked. In fact her on/off fiance Justin Theroux may have actually dumped her rather than helping her to blow out the candles! Do you think that these two will ever get hitched or is it one of those long and dragged out relationships that will eventually come to a quick ending? Tell us your thoughts in the comments below!