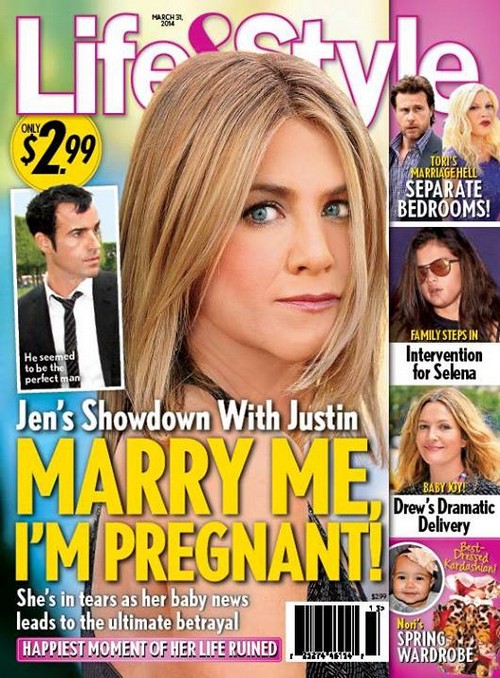 Hey guess what – Jennifer Aniston is pregnant! How many times have we heard that in the last few years? However, rumor has it that this time isn’t just a rumor but instead it’s fact. Supposedly Jen recently found out that she is expecting the baby that the press seems to have wanted her to have for years now.

According to the March 31st print edition of Life & Style magazine it didn’t take Jen long to reach out to on/off fiance Justin Theroux. The two had recently appeared to be more off than together but with the news that they are about to become parents on her side, Jen felt it was the perfect time to lower that proverbial boom on her man. Sources say she is now rallying hard for a wedding and while Justin has really dragged his feet on the whole issue, learning that he’s about to be a father totally freaked him out. L&S claims that Jennifer is screwed and Justin is refusing to bite the bullet and swap those vows.

Also in the new issue is an update on Selena Gomez. Girlfriend has been losing friends left and right because of her continuing relationship with Justin Bieber. Her family can’t seem to get through to her and there are new details on exactly how much of a hot mess Selena is now.

Speaking of messes, Tori Spelling has let her cheating hubby Dean McDermott spent time at their family home but you better believe they have separate bedrooms. Life & Style has the latest on their troubled relationship and how she is struggling to trust Dean. Do you think that this marriage is salvageable? Will rehab for sex addiction cure Dean or is it just an attempt to look a little better in his wife’s eyes? Tell us your thoughts in the comments below!