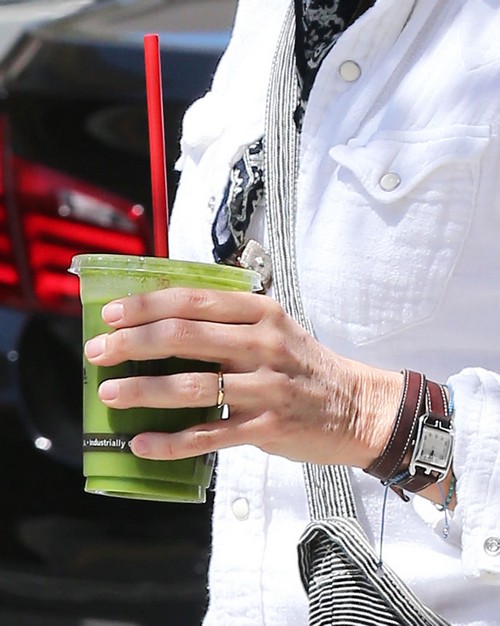 It’s never good to begin a marriage with the deck seemingly stacked against you and that is exactly the case for Jodie Foster and Alexandra Hedison. The couple began dating last fall and already decided to tie the knot earlier this week. It’s a move that has those close to Foster super worried because there are a number of issues that could easily spell disaster for the two. According to the May 5th print edition of National Enquirer Foster has really altered her life to accommodate Hedison’s personal struggles.

The actress-turned-photographer has been sober for ten years and Foster has all but completely quit drinking in order to make sobriety easier for Hedison. Ironically, it was Ellen DeGeneres’ alleged heavy drinking that caused Hedison to end their relationship years ago. But while Foster is attempting to remove temptation the fact of the matter is that this is a high stress situation. Foster shares custody of two sons with ex girlfriend, Cydney Bernard and the two still share a very close relationship. It’s the kind of situation that naturally makes Hedison a bit uneasy and that stress could lead to a relapse.

Foster’s friends also worry that her estimated fortune of $100 million could be the most appealing part of the whole marriage for Hedison. Foster is said to actually be pretty naive in the romance department and has shot down notion’s that Hedison would ever fake a romance with her for a nice pay day but her friends aren’t so sure. Any way that you look at it this marriage could easily crumble in a really dramatic way. The question is will it? Do you think Foster and Hedison will end up happy together for the long haul? Tell us your thoughts in the comments below!

Recently married actress Jodie Foster shows off her wedding ring while out doing some shopping in Los Angeles, California on April 24, 2014. Jodie quietly tied the knot with her girlfriend of a year Alexandra Hedison over the weekend!