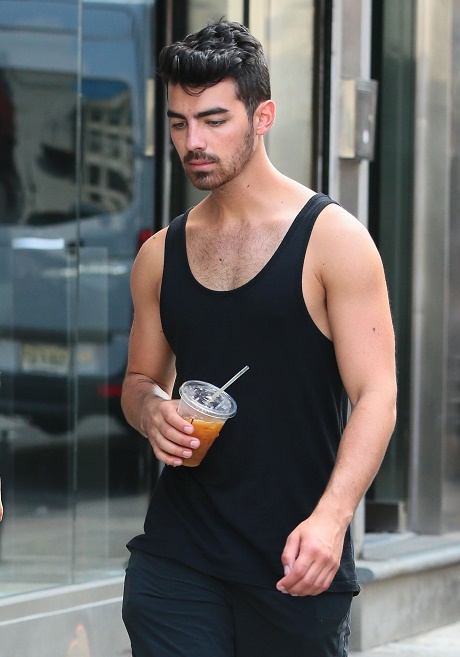 Joe Jonas clearly doesn’t care about playing by the rules, since he’s moved on from ex-girlfriend, Blanda Eggenschwiler, by dating her best friend, Gigi Hadid. Isn’t that breaking some sort of unspoken rule about dating friends, and shouldn’t Blanda and Gigi have more problems over this?

Joe and Blanda broke up in July after two years of dating, supposedly because Joe was trying to get clean and Blanda’s druggie influences were not helping with that. But by moving on to her best friend, it’s almost as though he’s sending her a message – either that, or the three of them are trapped in some sort of weird, polygamous relationship.

Plus, Gigi JUST split with Cody Simpson, but she apparently couldn’t wait to get with Joe. Clearly, she had no consideration for Blanda’s feelings on this matter, and it almost seems as though Joe and Gigi might even have had an affair when they were still dating their significant others.

A source close to the situation tells Star Magazine, “Gigi and Blanda had been friends for years. Blanda feels crushed and betrayed.”

Yeah, and can you blame her? Her best friend is dating her ex-boyfriend, a mere two months after they broke up. Joe and Gigi didn’t even wait a respectable amount of time before going public with their relationship, and based on all their paparazzi-accompanied strolls and dates, they clearly have no interest in hiding the fact that they’re dating – either from Blanda or the public.

What do you guys think of this convoluted love triangle? Let us know your thoughts in the comments below.