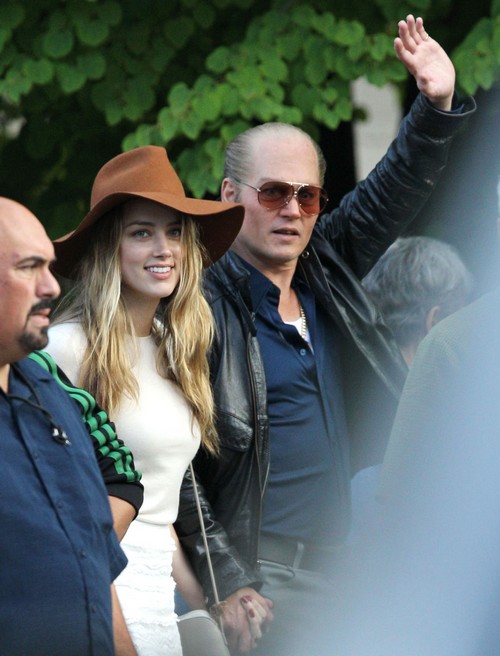 Sources report that Johnny Deep is starting a rock band and going on tour in a desperate attempt to appear young and hold on to Amber Heard. Johnny Depp and he girlfriend half his age Amber Heard have officially been together for two years now, and the couple is reportedly playing house with Johnny’s children from a previous marriage, and it is safe to say the magic is gone. I think we all know why Amber began hooking up with Johnny Depp… he is Johnny Freaking Depp, what woman in her right mind wouldn’t want to hook up with him.

However, two years have passed since Amber and Johnny began making headlines together, and the reality of their relationship has begun settling in – for both of them. Amber Heard is learning the hard way that time does not care if you are Johnny Freaking Depp or a bus driver named Bob, her future hubby is not the same man in the posters she was hanging on her wall during her Freshman year of high-school. And, Johnny knows that he is losing her, and trying everything he can think of to appear to be the hot, hip guy Amber had a crush on growing up.

According to the October 13th edition of GLOBE Magazine, “Pirates of the Caribbean star Johnny Depp is planning to get a rock band together to tour next year. Depp, 51, used to front garage bands before he drifted in to acting. In recent weeks he’s jammed on stage with Aerosmith, Willie Nelson, and The Black Keys.” According to GLOBE’s inside source, “Johnny’s desperate to be a successful recording star, and plans to go for it big time next year. He’s always said he’d rather win a Grammy than an Oscar.”

Of course Johnny’s desperate to become a successful recording star, he needs to spice it up and keep his fiancee Amber Heard interested. She’s two decades younger than him, but going on tour with a rock band might just be enough to keep her around a few more years. What do you think about Johnny Deep’s latest midlife crisis? Do you think becoming a rock star will save Amber and Johnny’s relationship? Let us know what you think in the comments below.