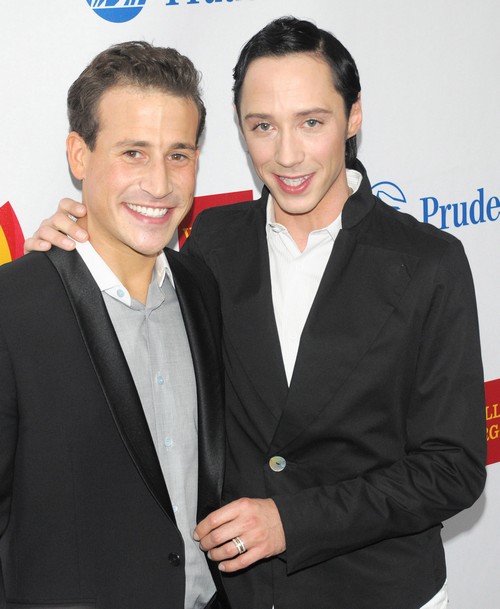 The soap opera that is Johnny Weir’s marriage to Victor Voronov is adding yet another chapter – the one where they try to reconcile and piece their marriage back together bit by bit, according to TMZ. Weir is a popular U.S. Figure skater that shot to a new found level of fame during the Sochi Olymics as a commentator. Shortly after the games wrapped up in Feb. he and Victor were in a New Jersey court convincing the judge to drop domestic violence charges and then came the announcement that their 2 year marriage was finished.

Since Weir has a flair for the over dramatic histrionics things got super ugly, fast. The couple were fighting over everything from furs to Faberge eggs, not to mention the poor dog caught between the two. After an ugly flame war it seems that Johnny and Victor are now giving it another go. But not before Johnny was forced to drop out of Celebrity Apprentice. This weekend they argued their way through trying to hash out a written agreement that would facilitate a reconciliation. Victor wants Johnny to take back all of the bitchy statements that he has made to the media and he also is insisting that Johnny’s mother stay out of their relationship – OMG!

No word yet on whether Johnny actually agreed to the terms. Knowing Johnny as I actually do, my guess is that he probably wants protection in writing as well, for his precious Birken bags and other designer items. Ironic isn’t it, Johnny is the one in the public eye, with an image to uphold yet it’s his husband that is worried about his name being smeared! Does this situation have restraining order written all over it? Tell us your thoughts in the comments below!