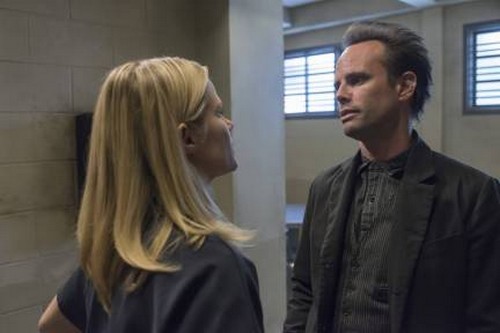 Tonight JUSTIFIED returns to the FX with a whole new episode called, “Good Intentions.”  On tonight’s episode Boyd tries to regain his stranglehold on the Harlan heroin market.  Did you watch last week’s season 5 episode 2?  We did and we recapped it right here for you.

On tonight’s show Raylan is king for a day in the seized mansion of a notorious mob accountant, while Boyd tries to regain his stranglehold on the Harlan heroin market.  Written by Benjamin Cavell; directed by Dean Parisot.

Meanwhile FX’s president of programming John Landgraf  announced today that Justified would be ending in the sixth season.  “It was Graham Yost and Timothy Olyphant‘s decision.  I would have liked to have had more Justified, it’s one of my favorite shows.”

Tonight’s Season 5 premiere looks like it is going to be great and you won’t want to miss it, so be sure to tune in for our live coverage of FX’s  Justified at 10:00 PM EST! While you wait for our recap hit the comments and let us know how excited you are about the new season of Justified premiering tonight?

The third episode of the season begins with Boyd asking his partner on the phone if he ripped him off. He says no and they should take a close look at the other boys. Meanwhile, Raylan and Allison Brander are engaging in some serious foreplay when Mullen calls to tell him that Monroe will get out on bail the next morning. He warns him to be careful since Raylan’s probably on Monroe’s shit list. He gets off the phone and goes back to the bedroom to resume his, ahem, activities with Allison. Suddenly, they hear a car alarm. Raylan spots his keys and turns off the alarm. The alarm goes off again, prompting Raylan to check out the situation. A long haired bushy man is waiting outside for Raylan. Raylan believes Monroe sent the man but the man insists he has no idea who Monroe is. Raylan advises him to leave, surprisingly he does. When Raylan gets back upstairs to Allison she’s ending a phone call herself and says she has to go. Raylan is confused.

The next morning, Raylan is waiting for Monroe when he gets out of jail. He tells Monroe to keep his “shit-kickers” away from his house. Monroe is curious about the man, but tells Raylan that if he wanted to come looking for him, he wouldn’t do to set off a car alarm. Mara is at the hospital with her father, Mooney is also there trying to find out why Mara recanted her statement. Later, Boyd questions one of his cronies about who betrayed him when he receives a call from Mara.Before she calls, though, Boyd learns that it was Johnny who ripped him off. At the station, Raylan learns he has to move out of Monroe’s house. He is pissed and says he’s not going anywhere. At Audrey’s, Dewey asks Daryl how long he’s planning on staying. Daryl asks Dewey if he’s going to tell the Feds where he’s at. He says no, but that Daryl needs to watch out for Raylan. Daryl says he’s fine with Raylan, and that he came to help out Dewey. When Dewey asks how Daryl’s going to do that, Daryl tells him that he wants to help Dewey with the business. Daryl informs Dewey that he’s getting ripped off and that Dewey could really use his help. Finally, Dewey relents.

The next day, Brooks asks Raylan if Monroe’s really going to kick them out. He doesn’t seemed worried. Allison shows up, he tells her about the man from last night. She asks if he has a shamrock tattoo on his neck. He does, so clearly Allison knows him. At the prison, Boyd visits Ava to see if she knows who ripped him off. She then asks him why she’s still in there. She accuses him of not doing anything to help get her out. He tells her that he’s doing everything he can but there’s not much he can do. She ends the visit. Meanwhile, Raylan find the mysterious visitor from the night before. His name is Henry, which we learn while Raylan is hitting him with a baseball bat. As it turns out, Allison had Henry’s son removed from his home. He believes that is Allison’s fault, not his or his wife, who abused the child. Raylan tells Henry if he wants to see his son again, he needs to get his shit together. Raylan tells him he also needs to leave Allison alone while getting his shit together. At Monroe’s cabin, Monroe asks Gloria if she knows who the man is that was outside his house the night before. She says she doesn’t know, but he doesn’t believe her. He thinks she’s trying to steal his gold so he strangles and smothers her but doesn’t kill her. She finally tells him that the man already knew what was in the house, he just asked her where it was. She tells Monroe that she didn’t tell the man where it was, just that it was in a safe somewhere. Monroe says he believes her, but that she needs to get in the house and get the gold.

Back at Monroe’s house, Brooks asks Raylan if it’s possible that Allison is a criminal. She points out that Allison smoked weed in front of him, and that she knew Henry. The doorbell rings, Gloria shows up wanting to take care of some “housekeeping.” Meanwhile, Boyd sends Carl to find a girl. Dewey shows up to confront Boyd. He tells Boyd he wants him to give him some money. Boyd asks Dewey what’s really going on. Dewey tells him about Daryl, and that he needs his cousin gone. Boyd tells him to man up to Daryl and make him leave. Back at the Monroe house, Raylan catches Gloria in the safe. Raylan and Brooks tell Gloria she has to tell Monroe that the safe was empty or she’s going to jail. At the station, Mooney is told that Mara wants him to come by the house for a welfare check. He goes, turns out Mara set him up. Boyd is there to blackmail Mooney into lying for him. Boyd holds Mooney at gunpoint and tells him he has to convince the police that he killed Boyd.

Gloria calls Boyd to tell him that the safe was empty. She tells Raylan that Monroe said he was going to kill Duffy. Raylan shows up at Duffy’s RV to tell him that Monroe is out to get him. While Raylan is telling Duffy what’s going on, they hear gunshots outside the RV. It turns out it’s one of Duffy’s men, Brooks shot him because she thought he was one of Monroe’s men. At Boyd’s bar, he and Mara discuss how to convince Raylan that Boyd is dead. They decide they need to give Raylan a “piece of Boyd” to prove his death. He takes off his shirt so they can decide what part of his body to cut off. While the talk is about removing body parts, the tension between the two is something different entirely. Back at Monroe’s, Raylan tells Allison he gets to stay in the house awhile longer. At Audrey’s, Dewey tells Daryl to hit the road. Daryl laughs at Dewey, but tells him that Messer has been ripping Dewey off. Messer tells Dewey that Boyd put him up to it. Dewey is upset, Daryl tells Dewey he has to kill Messer for stealing from him. At the bar, Boyd is dressed again and having a drink when Carl shows up with the girl Boyd wanted him to kidnap. Boyd asks the girl where Johnny is, she tells him she doesn’t know. They take her phone to call Johnny.