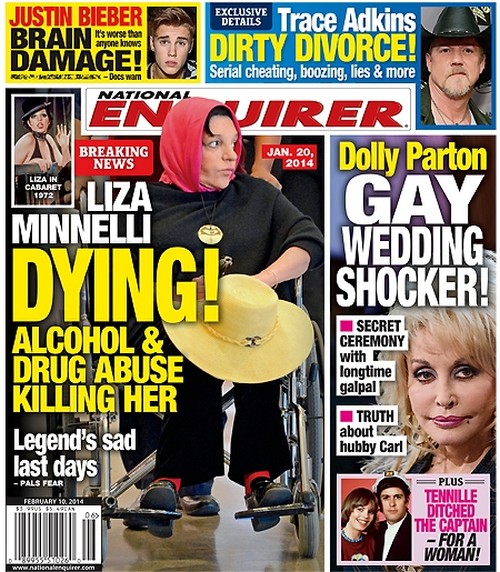 It has been a rough few weeks for Justin Bieber. First his $10 million mansion was raided and then last week he was popped in Miami Beach for a DUI that seems to be a bit questionable. Regardless of whether the legal charges stick, Biebs has taken a real hit with the general public and it has become very clear that the 19-year old seems to be battling some serious addiction issues. Of course the press is looking for anyone close to the troubled singer to spill the beans on his life and given the crew he runs with, people are talking.

According to the Feb. 10th print edition of National Enquirer Justin’s former housekeeper, Tatiana Voziuk has talked in detail about how Biebs keeps the ingredients for sizzurp near his bedside as it seems to be his deadly drug of choice. Sizzurp is a mixture of cough medicine, jolly ranchers and soda which has been compared to drugs as powerful as heroin. It also can cause brain damage and that seems to be a concern of a friend close to the singer. “Justin needs to be put in a psychiatric ward or lockdown rehab facility. It’s worse than anyone knows. He needs help – and he needs it now!”

Also in the latest issue of National Enquirer you can get all the behind-the-scenes drama surrounding Trace Adkins. The country star recently freaked out and apparently he is knee deep in heavy duty boozing and a cheating scandal that is laying the groundwork for one really ugly divorce. Speaking of country star’s, is Dolly Parton gay or at the very least has she been hiding a secret galpal? The latest issue has the real story about Dolly’s marriage to her husband Carl and what secret ceremony recently went down in private! Grab the National Enquirer for these stories and more but in the meantime, just how far gone do you think that Justin is? Tell us in the comments below!