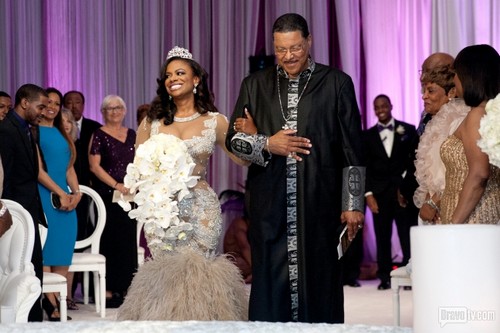 This season Bravo Media cordially invites us to celebrate the wedding of Kandi Burruss and Todd Tucker in the upcoming docu-series Kandi’s Wedding. Against vocal family opposition that played out dramatically in season six of The Real Housewives of Atlanta, Kandi and Todd have decided to move forward and tie the knot.

Each episode follows Kandi and Todd as they plan a larger-than-life “Coming to America” themed wedding ceremony, signifying the couple’s initial introduction in Africa. The two are confident that they can pull off their dream wedding without the help of a wedding planner — and in only five short weeks. Adding to the pressure of a major time crunch is the reality that family drama is never far away. Kandi and Todd are hosting his mother at their house prior to the wedding and are faced with her opposition towards the outspoken Momma Joyce. Will there be a clashing of  mother- in-laws and will Kandi find the strength to stand up to Mama Joyce, or will her powerful influence jeopardize the bride-to-be’s fairytale wedding?

On tonight’s premiere episode After a tumultuous engagement, Kandi and Todd have finally picked a wedding date…and it’s only five weeks away! As Kandi rallies her team to help plan a “Coming to America” themed wedding, the troops express doubts about pulling off such an extravagant wedding in so little time. Meanwhile, Momma Joyce meets with her sisters who try to convince her to let go of her issues and support her daughter’s decision to marry Todd.

Tonight is going to be a fun episode of Kandi’s Wedding for sure and you’re not going to want to miss a minute. Tune in at 8Pm EST on Bravo and we’ll be recapping it right here for you but in the meantime, hit up the comments and let us know your thoughts on the new Spinoff?  Check up the sneak peek preview of tonight’s episode below!

Kandi hasn’t talked to her mother much since the play, but she’s sure deep deep d-e-e-p down her mother won’t want to miss out on her wedding. One of the main arguments between Kandi and her mother was the choice of fiancée. Mama Joyce doesn’t like Todd (who’s obviously involved in the wedding) and she doesn’t like Kandi’s best friend Carmon (who is also going to be helping with the wedding). So it’s really just a matter of time until Mama Joyce pops back up again. If not to be supportive then she’ll at least want to sit in judgment.

And even Carmen knows this. That’s why she warned Kandi that nothing better go wrong with this wedding or else Mama Joyce will be the first to chew her out.

The last time Mama Joyce and Carmen were in the same room – a fight nearly ensued. It was embarrassing for all parties involved. And that was probably the first time a bridal shop had to witness a brawl among the pedestrians.

Plus Kandi’s aunts had also gotten tangled up with that at the time. They had told Kandi, while she was trying one of the bridal gowns, that they didn’t approve of her getting married. Yet a lot has changed since then. The aunts now appear to be changing their mind about this whole marriage business. Mainly because they’re putting their sole focus on wanting Kandi to be happy. As for Todd, they’re still completely sold on him, but they’re willing to give him the benefit of the doubt.

Kandi’s aunts have made an abrupt change. And in doing so they had also promised to handle Joyce. They say they can talk their little sister around and that should be less worry for the bride. However Kandi’s wedding plans aren’t going as smoothly as she hoped. Her wedding dress was left till the last minute. After the last fitting, Kandi didn’t really feel like going for a Round 2. Fortunately, she has a designer as a very good friend.

Rico is a vastly talented man although no one has nor should they ever forget he was also the man that created the “smurf” dress for Kandi. His designs can sometimes be a bit out there and the two bridesmaids that came with Kandi told her they didn’t like his initial drawings for the wedding. So how was he able to still sell these dress designs to Kandi? He told her it was going to be a wedding a gift. As in her gown and her bridesmaid dresses were all going to be free!

And who can turn down free items?

Kandi has hoped her best friend could have made it to the fitting, but for some unknown reason Carmon can’t be found when needed. Carmon is a bridesmaid as well as Kandi’s assistant. So why is Kandi getting a hard time for just trying to contact her?

Todd found Carmon and another one of Kandi’s assistants planning for the wedding. And seeing as this is the only opportunity to get a progress report – he came right out and asked her how the plans were going. Carmon’s answer was “I couldn’t do this” and “I couldn’t do that”. There is no “well, let’s try this”. As if she’s not looking for any alternatives to what she couldn’t do.

This upset Todd. He felt that Kandi’s friends were letting them down and he took Carmon to task. He told her to get her act together and once he was done reading the riot act – she sent an angry text to Kandi. In the text she basically accused Kandi of using Todd to voice her frustrations. And then she promptly disappeared.

Carmon went off the grid for a few days only to crop back up again to tell Kandi that she felt hurt. She brought up everything that happened. What with Mama Joyce and the rumors with Todd in order to say that she feels like she can’t do her job properly. But if she was looking for sympathy then she went to the wrong place. Kandi told her to quit then. Why ruin a 20 year friendship over a job that’s not working out?

So Kandi is down one assistant at the same time her mom decided to take an “interest” in the wedding. She needs a buffer! Her aunts tried and they failed at getting their sister to behave. So is there anyone out there that can manage Mama Joyce?