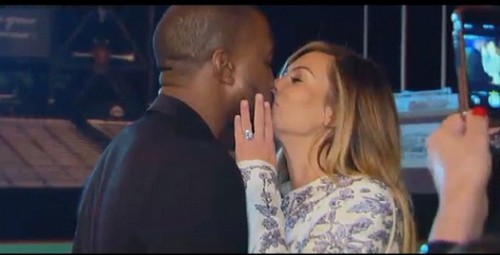 Kanye West went on yet another rant against the media. At this point he’s probably averaging about one psychotic episode per week right? I’m no MD, but this guy may need medication, that’s how unstable he appears to be. If Kim really cared about her man she’s find him a therapist because he hasn’t been likable since his mother died. Quite frankly, his reputation took a big hit when he decided to dive into a bottle of Hennessy at an awards show and publicly belittle Taylor Swift.

This latest rant is all about how the media is uncomfortable with his relationship with Kim Kardashian. It’s funny, they loved her and Reggie Bush, but you know, details and all that. Kanye basically accuses the media including TMZ of character assignation claiming that they make him appear to be an animal and a maniac, and it’s all because he’s defiling a woman whose only American royalty in her own mind.

Listen, the world is racist and that is a fact. Black celebs are punished and judged more harshly than their white counterparts for similar behavior. This happens in and out of Hollywood, to deny it would just be wrong as there are countless examples of the privilege enjoyed by whites (Charlie Sheen, Sean Penn). However, Kanye West is the only person in control of his image. He plays into the hands of the media that hates him and then burdens the ears of his fans with his bellyaching during concerts. If he doesn’t like the way he is portrayed then he needs to make some changes.

He hates the photogs, yet he is engaged to someone who is probably on first name basis with most of them. It never ends well with Kanye and the paps, yet he puts himself in a position to be accosted by them regularly. At what point does he take responsibility? No one is saying that Kanye West needs to deny his blackness (because being black should never be synonymous with his behavior) nor does he have to become some non-threatening benign public figure, but he needs to understand that just two wrongs do not make a right.

Additionally, his incessant need to make Kim Kardashian as big a deal to everyone else as she is to him is way past tiring. These two are not exactly inventing the wheel by hooking up and only their narcissism allows them to think so. I think a fair assessment would be to say that Kanye West is a jerk. He’s a black jerk, so he can’t enjoy the same privilege as his white jerk peers, but that does not on any level excuse his jerky behavior. Also, I think white and black men everywhere are taking a collective sigh of relief that Kim is now Kanye’s problem. What do you guys think? Is the media demonizing poor little Kanye? Is the world not ready for Kanye and his perfect bi—? Tell us in the comments section below.