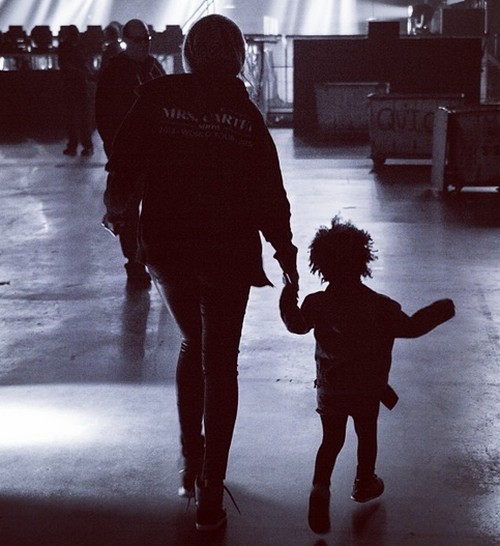 By now Chris Brown’s girlfriend Karrueche Tran is used to being beat down by Rihanna fans on Twitter. But now that the Beyonce is involved Karrueche Tran may want to run for cover. While co hosting BET’s popular show 106 & Park, Tran made a joke about the hair of Beyonce and Jay Z’s 2 year old daughter, Blue Ivy.

We all have seen that something needs to be done to Blue Ivy’s hair, but we aren’t brave enough to face the Beyhive on Twitter. During the segment “The top 6 things, Blue Ivy thought about the VMAs” Tran jokingly said:

“I really did wake up like this, because my parents never comb my hair”

She laughed it off, but Twitter surely did not. Tired of being attacked by the Beyhive, Tran posted a tweet saying:

“Now y’all know I LOVE me some Beyoncé and Blue Ivy! I didn’t write this script y’all lol”

Tran is now blaming BET for the harsh joke saying they changed the script in the prompter at the last minute and she wasn’t aware of the change (as if). After the show she and her manager were very upset, and thought the joke was very harsh.

This isn’t the first time Blue’s hair has been talked about and it probably won’t be the last. Back in May a change.org petition was made to get her famous parents to comb her hair. No matter how her hair looks, Blue is living better than us!

Karrueche tells TMZ she actually likes Blue’s hair, saying … “I love that Blue is able to wear her natural hair.” She also stated she would never disrespect Beyonce and Blue Ivy. The President of BET Stephen Hill also apologized and has reached out to Jay-Z and Beyonce. Supposed actions on the producers have also been taken for putting Karrueche in that situation. Seriously, is this really a big deal? Karrueche Tran laughed at Blue Ivy’s hair… so what?