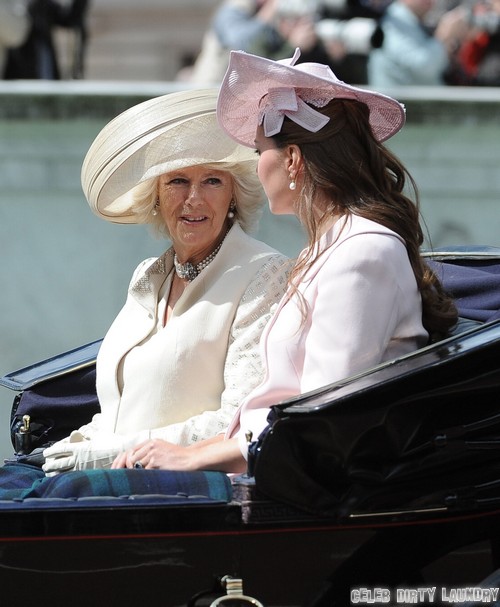 I knew it would happen sooner or later. Eventually Kate Middleton was bound to get sick of being walked on by Camilla Parker-Bowles and fight back, right? Well, it looks like that new mama bear instinct is starting to carry over into other areas of Kate’s life because she finally realized that she can be just as intimidating as good old Cami. According to the Jan. 27th print edition of GLOBE magazine after better than two years of harassment and insults Kate finally reached her boiling point and lashed out recently.

Camilla decided to remind Kate that she’s looking a bit older since having prince George and that any second now Prince William will be looking for a mistress just like his father did. Kate in the past would have kept her mouth shut and left the room in tears. Not this time though, instead she lashed out telling Cami that she was good and tired of taking her abuse. She also reminded her that whatever garbage she spews really doesn’t matter because Kate is still going to be the next Queen. Boom.

Camilla walked away from that, took a few swigs from her infamous flask and then did battle with Prince Charles. I’m pretty sure once Kate saw that she can stand up to Camilla it felt pretty damn good and she’ll no longer be the duchess’ favorite whipping post. It’s about time that Kate stood her ground and knocked Camilla into her deserved place isn’t it? Tell us your thoughts in the comments below!