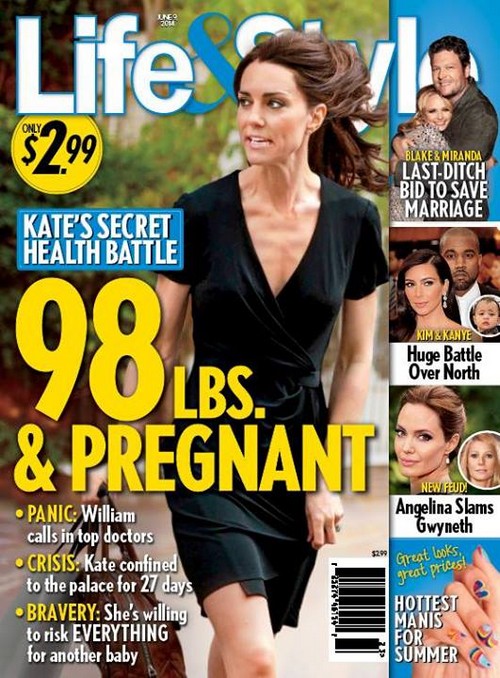 Has anyone seen Kate Middleton since she wrapped up that whirlwind tour of Australia? I think the answer is that precious few outside of her immediate circle have seen the duchess, and the reason is quite simple — she is pregnant. CDL was the first to tell you that Kate is indeed expecting baby number two and it has caused her to battle the same kind of morning sickness that took her out of commission while carrying Prince George. Trust me when I tell you that Kate didn’t choose to sit out a charity event thrown by Ralph Lauren . . . she had no choice!

The June 9th print edition of Life & Style magazine has followed our lead and is also telling its readers that Kate has been confined to the palace for nearly a month due to her new pregnancy. The already pin-thin royal is struggling to keep weight on but is ready to do whatever it takes to have another healthy baby.

Kim Kardashian and Kanye West haven’t even been married a week and already a battle royale is brewing over their daughter North. Life & Style has the latest on their clashes over Nori’s monochromatic wardrobe and Kanye’s desire to continue living alone in his West Hollywood bachelor pad.

Speaking of unhappy couples, Blake Shelton and Miranda Lambert have been on the rocks for about a year now. But rumor has it they are pulling out all of the stops to save their marriage. Do you think that they’ll keep it together or will we be hearing of a split before this year ends? Tell us your thoughts in the comments below!