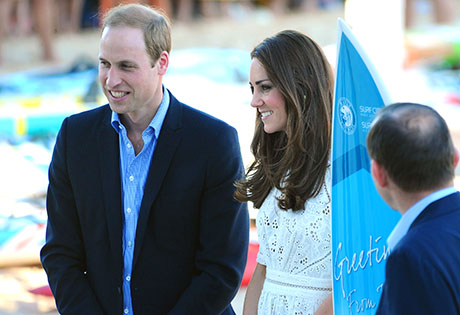 Kate Middleton, Prince William, and young Prince George‘s tour throughout Australia is proving to be an epic event, one the world’s eager to watch unfold. While at the Royal Easter Show at Sydney Olympic Park on Friday, Kate Middleton teased that her balding hubby, Prince William, should consider trying on an alpaca-wool toupee for size. She made the joke after a farmer at the event showed the prince some alpaca wool that resembled his own hair color. Of course Kate Middleon doesn’t really want to tour the world beside an alapaca-wig wearing prince, but it’s nice to know she’s got a playful sense of humor!

“The Prince was interested in the alpaca, and as I showed it to them, the Princess said he should put it on his head,” Lyn Crejan, the farmer, told reporters. He continued, “She said, ‘You need it more than me,’ and pointed to [Prince Will’s] head and he  laughed.”

During their visit on Friday, they watched a sheering display and fed some snacks to an adorable ram, who goes by the name of Fred. Fred, an animal who definitely knows how to act while in the presence of royals, bent down on one knee to show his respect. What a fancy ram!

After appearing at the the agricultural show at Olympic Park, the couple attended a lifesaving surf event on Manley Beach. Check out photos from that visit in the gallery below and let us know what you think of this royal Australian tour!