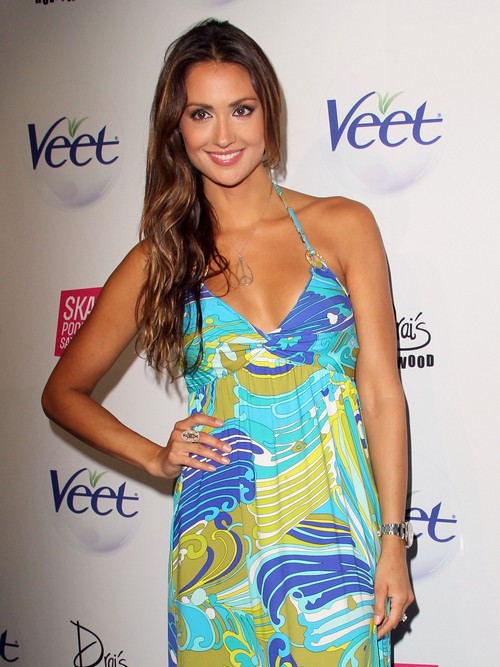 Deal or No Deal model Katie Cleary claims that her husband Andrew Stern‘s suicide had nothing to do with pictures of her flirting with Adrian Grenier or Leonardo DiCaprio. However, Andrew’s friends have a different story, and they say that his marital troubles and Katie’s flaunting of her celebrity affairs led to him shooting himself in the head on Sunday.

Reports last month suggested that Katie was hooking up with Leo while at the Cannes film festival. At the very least, they were getting way too cozy at several parties, since many photographs showed Leo leaning into Katie and kissing her on the cheek.

However, Katie’s rep is now doing damage control [according to TMZ], and states that Katie and Andrew had ‘discussed the pictures’. Apparently, they were a ‘non-issue’, which in lawyer speak, means that Katie doesn’t want people to think that she’s to blame for Andrew’s suicide. The couple did split 8 months ago, and their divorce was filed in April, so Katie can’t be held completely responsible for Andrew’s decision.

But even with that being said, Andrew’s friends claim that he still loved Katie and only broke up with her because he was so embarrassed by her public flings with celebrities. So even if Katie never cheated on him while they were married, perhaps he still felt hurt, betrayed, and humiliated? Then again, it’s been reported that Andrew also suffered from depression and financial issues, which could have been contributing factors to his suicide. TMZ also reveals that Andrew was using hormone replacement to deal with libido issues. This equates to taking testosterone and HGH which are powerful anabolic and androgenic steroids and drastically affect behavior.  Reports are that Andrew quite the drugs about a year ago so they certainly didn’t influence his suicide.

What do you guys think? Do you believe that seeing his wife getting cozy with Leonardo DiCaprio drove Andrew to the edge, or was it a culmination of several different issues? Let us now your thoughts in the comments below.