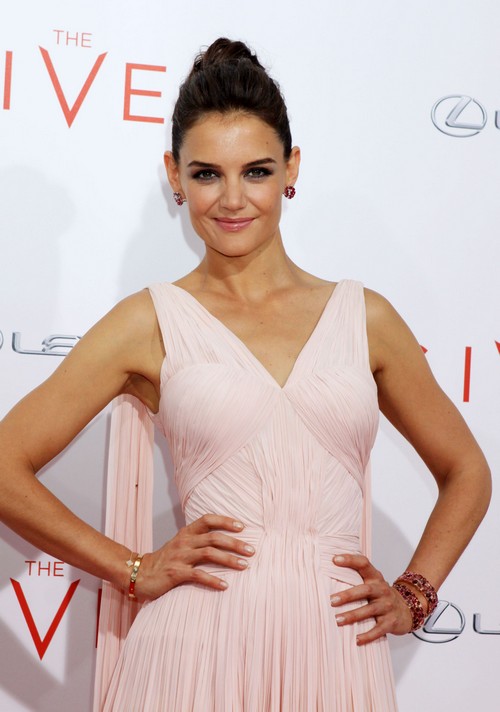 I made myself a cuppa’ hot coffee (two sugars, one shot of milk) and sat down at my desk. An email alert popped up in the corner of the screen. It was my editor. You see my editor and I make a good team. He’s intelligent and I’m…. Well, I’m a protagonist in an antagonistic world. It’s how I’m wired you know? I’m just a guy with an old laptop and a broken typewriter. I opened the email. “Write about Katie Holmes.” Yes! A talentless starlet with a failed career – what’s not to like?

“The first time ever I saw your face, I thought the sun rose in your eyes. And the moon and the stars were the gifts you gave,” said Katie Holmes. She fell in love with a mad prince. They lived a peaceful life in a castle on the outskirts of Cult City. But as time went by, Holmes realized that her mad prince was just a lonely frog with an inflated ego. There was no castle, no peaceful existence and no semblance of reality. It was a world without light, without colour and without meaning.

No, that’s not right. It couldn’t have been a fairytale. I hate fairytales! Tom Cruise as a “mad prince”? What? I can’t remember. I think I wrote this instead:

Katie Holmes is a talentless ingénue with a creepy ex-husband. She told DuJour magazine that her career failed because “[actors] don’t really have a lot of choice in the matter. You have dry spells, and then you have times when there is a lot of opportunity.” How insightful. She’s like the female version of Deepak Chopra.

And then I woke up in a Scientology lab. Tom Cruise kneeled before me and said, “Are you awake? They wrote about me on Celeb Dirty Laundry. They said I’m a mad prince. Am I? Am I really a mad prince? I don’t think so! No, no! I don’t! I didn’t do anything wrong. I ate a planet and hated Brooke Shields for a while. Is that so bad? You know what? Katie Holmes – bless her alien soul – made me cry all the time! All the time! She called me ‘crazy’. Am I crazy? Am I? You tell me.”

Yes, Tom, you are absolutely insane. Completely and utterly bonkers. Go sign your billion-dollar-per-year contract. Katie Holmes is the worst actress known to mankind. And you’re an idiot.

And that’s what I wrote. I think…