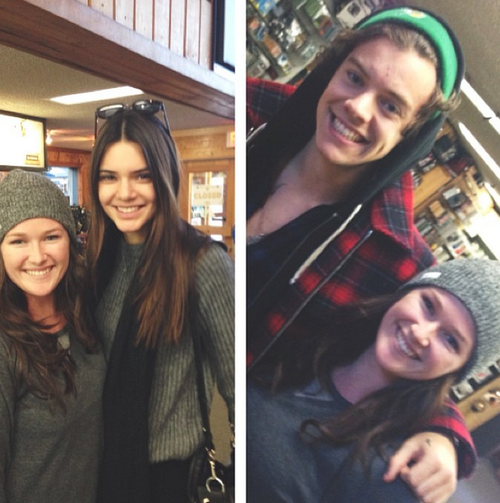 Uh oh, I guess a lot of One Direction fans aren’t going to be too happy about this. A few days after a report surfaced insisting that Harry Styles had kicked Kendall Jenner to the curb because she’s a total bore, the new couple turned up together in California on Thursday looking as happy as ever. Kendall and Harry were photographed with a fan named Allie Connolly at a Mammoth Lakes snowboard shop.

Allie posted the photos to her Twitter account and regretted doing so pretty quickly once the more rabid One Direction fans started to insist that she was paid to post pics perpetuating the myth that Kendall and Harry are dating. It seems his fan base really doesn’t want to believe that Kris Jenner’s daughter could ever in a million years capture Harry’s attention. Reality check kids, aside from it looking like this is a match made in PR heaven, these two may actually kind of work together.

Think about it. Harry is trying to figure out who he’ll be once One Direction is no more and Kendall is modeling more and probably realizes that in order to have a serious career she’ll need to step out from the Kardashian money making machine because it is turning into a sinking ship. In other words, these two are standing in very similar positions career-wise and that is no doubt something big that is connecting them! Do you think that Harry and Kendall will actually have a real relationship or is the deck a little too stacked against them? Tell us your thoughts in the comments below!