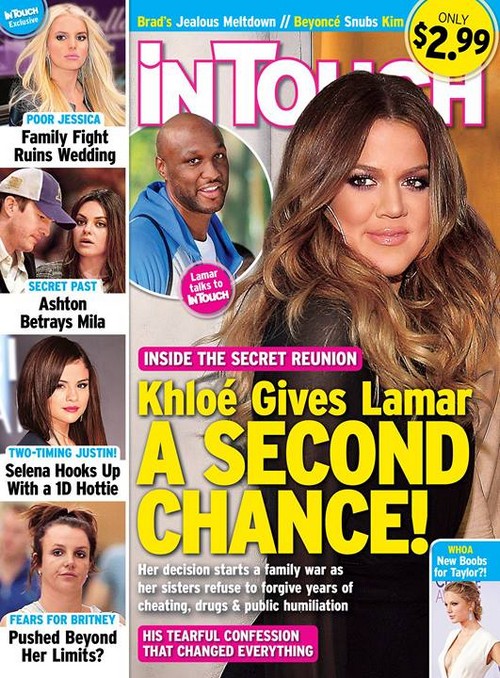 Just this week Khloe Kardashian admitted that she’s still not over Lamar Odom, in spite of having filed for divorce from him late last year. Just because the legal paperwork had been filed that didn’t mean that Khloe’s heart was in a better place and from the sounds of things, neither is Lamar’s. He has refused to sign on the dotted line and make the divorce official, not because of financial matters but because he still loves her. According to the March 31st print edition of In Touch magazine Lamar recently apologized to Khloe is such a way that it has made her think seriously about giving him another chance!

Needless to say, after years of drugging and cheating the rest of the Kardashian family is up in arms over the notion that Khloe could even consider taking Lamar back. They figure she’s just setting herself up for more heartbreak and she has already had more than her share. Khloe finally broke away from Lamar and her sisters are strongly suggesting that she continue to keep her distance.

There seems to be wedding drama brewing for two celebs and the latest issue of In Touch has all of the dirt. Jessica Simpson has postponed swapping vows with Eric Johnson a few times in favor of starting a family. Now that they have a clear path to the altar it’s Jess’ father, Joe Simpson that is causing problems. Jess doesn’t necessarily approve of his friends and keeping them from crashing her wedding is proving to be tricky.

Also planning a wedding is Mila Kunis but according to sources Ashton Kutcher may have already betrayed her. Do you think that they will actually end up marrying? Tell us your thoughts in the comments below!