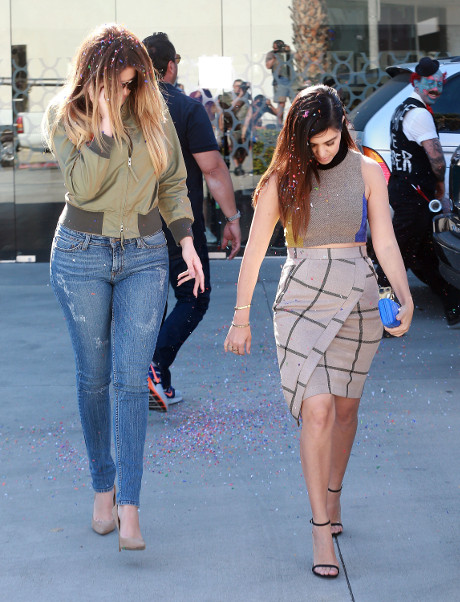 Uh oh! Khloe Kardashian and Kourtney Kardashian got attacked with a massive confetti bomb while filming scenes for their popular reality show Keeping up with the Kardashians. The sisters were at a rug store (yes, rug) shopping for carpets, as one’s inclined to do while visiting rug store, when a man in a clown costume assaulted them with a confetti toy! Luckily, the sisters’ bodyguard took care of the man as authorities were promptly notified.

What do you think about the Kardashians getting showered with confetti? Do you think the man should’ve been arrested (i.e. do you think the attack was meant to be malicious) or do you think this was all just one big misunderstanding? Leave us your thoughts in the comments section below, and don’t forget to check out the photo gallery below, which is filled with tons of pictures from the scene of the party crime.

Good thing the sisters are all right! We can’t wait to see the details of this event on an episode of KUWTK — and you know they’ll definitely show it!

Photo caption: “Reality stars Kourtney & Khloe Kardashian get hit with a confetti bomb by a man in a clown costume while filming scenes for ‘Keeping Up With The Kardashians’ at a rug store in West Hollywood, California on April 11, 2014. Afterwards Kourtney & Khloe’s bodyguard held the tattooed barber to the side while he called the police!”