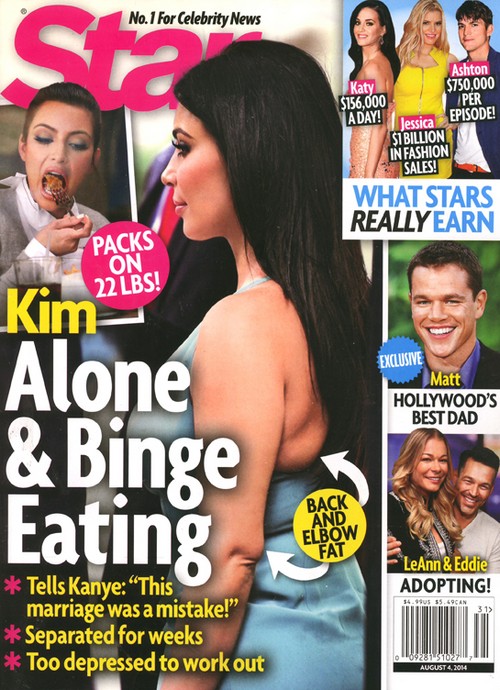 Remember how Kim Kardashian made such a spectacle of herself while losing the last of her baby weight? She couldn’t show off her body enough on all of her social media accounts while prepping to marry Kanye West. Now, just two months after swapping vows we are hearing that her life has already radically changed. After Kanye decided not to move into the money pit that he was renovating – supposedly for his new family- and instead has chosen to live full time in Paris alone, well the fights have been plentiful. Rumors of separation and divorce are coming out – we are reading that the marriage is in effect over.

According to the Aug. 4th print edition of Star Magazine, Kim’s appetite is also of epic proportions as she is binge eating her way through the upset of realizing that she has signed on for yet another doomed marriage. I have to wonder what she was thinking when it came time to marry Kanye. I mean did she ignore that very public memo that clues us all into the fact that he is quite angry, allegedly abusive and simply an embarrassment to be seen with? Perhaps he feels the same way about Kim and that’s why he leaves the country when it counts most! Do you think Kim will eventually divorce Kanye like she has her other husbands? Kanye talks about Kim like she is this great prize but in reality he seems to spend the minimum amount of time with her and Nori that he can get away with.

Speaking of messed up marriages, according to Star LeAnn Rimes and Eddie Cibrian may be getting ready to adopt a baby. Of course this could just be an attention seeking conversational ploy while they are peddling that reality show of theirs’ currently airing on VH1. I have to admit, I see her adopting before I see LeAnn risking losing her waistline lest it give Eddie a reason to cheat. I mean you and I know that he doesn’t actually need an excuse but apparently his wifey still thinks otherwise.

So what do you guys think, how long before we learn that Kim and Kanye have actually split? Tell us your thoughts in the comments below!