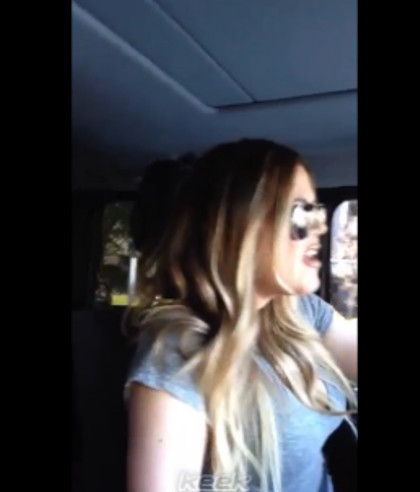 Kim Kardashian posted a video on her Keek account today featuring Khloe Kardashian and Kylie Jenner belting out “Mirrors” by Justin Timberlake. While the Kardashian clan might have fame attached to their name, no amount of Kris Jenner power’s going to get them a Grammy nomination because these ladies are, um, not the best singers. But if you like hilarious car singing with not a note in tune, then this video just might make your day. Kim posted the video alongside a note that said, “This won’t be good for their new albums!!!!”

It’s pretty obvious that this is all in good fun and, as far as we know, Khloe and Kylie aren’t channeling their energies into a new album (thank heavens); however, if they did, would you pick up a copy of their work? Let us know in the comments section below if a Khloe and Kylie teaming up on an album would bode well with you and your Kardashian loving hearts!

Judging from the comments left on Kim’a account, many people shared our initial reactions of “OMG stop the singing.” In reacting to the brilliant rendition of “Mirrors,” fans said . . . . “You girls look great!! Lol but the singing, sounds like dying cats lol too funny!!!!” — “Hahahaha, Khloe don’t sing anymore XD” — “It’s comforting to know that I’m not the only one who sounds like that’s when I sing lol” — “Wow they’re really off key…lol.”

Take a look at the video below and let us know what you think? Are Khloe and Kylie destined for the stage?

Feb 4, 2014 | This won’t be good for their new albums!!!! @KhloeKardashian @KylieJenner by KimKardashian on Keek.com