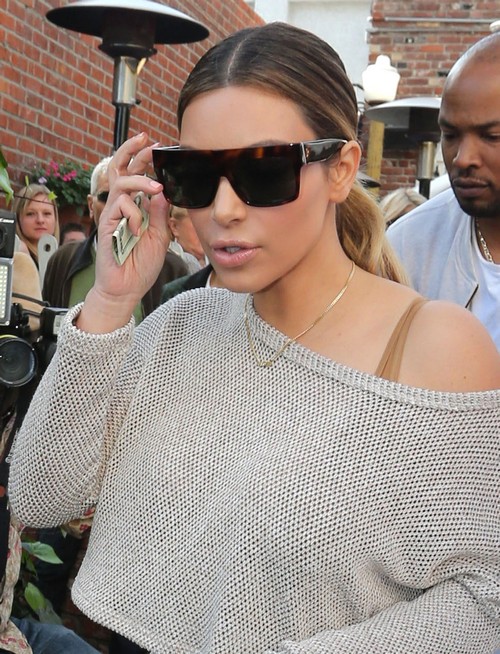 Kim Kardashian and Kanye West were photographed in Beverly Hills, California early this Sunday morning leaving Beverly Hills Medical Center. Kim Kardashian kept her head down and clutched her stomach as the pair headed to their car. The Keeping Up With The Kardashians star did not appear to be feeling well this morning. We can’t help but notice she sported the same nauseated expression on her face that she had when she was in the early stages of pregnancy with her daughter North West.

Yesterday Hollywood Life reported that Kanye and Kim are already trying to have more children. According to Hollywood Life’s exclusive source, “Kim finally feels like her life is exactly where she’s always wanted it to be. She and Kanye are already talking about having another kid because they want Nori to have lots of brothers and sisters.”

Between the pictures of Kardashian and West leaving Beverly Hills Medical Center together, and a friend of the couple’s coming forward and stating they are trying to add another baby to their family, we can’t help but assume that Kim Kardashian is pregnant again! Why else would Kanye West feel the need to escort his baby-mama to the doctor’s office? Public Medical Centers are not exactly Kanye Wests’s scene. If Kim just had a cold or a pulled muscle, Kanye wouldn’t have risked dealing with the paparazzi to take her to the doctor’s office.

The real question is, what is the couple going to name their second baby? South West? East West?

Do you think Kim Kardashian is pregnant with baby number two? Let us know in the comments below!