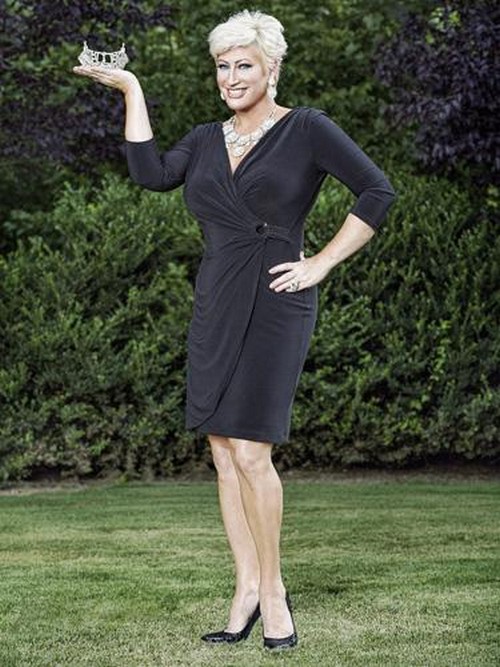 Tonight on Lifetime a new docuseries airs called KIM OF QUEENS.  The show  stars  sassy Kim Gravel, one of the country’s most successful and outspoken pageant coaches, is on a mission to find diamonds in the rough and transform them into confident young women.

Along with the help of her mother Jo and sister Allisyn, Kim lives to polish local girls into future leaders, able to take the crown and rule the world.  While applying her homegrown philosophy that beauty is only skin deep, Kim, with her larger-than-life personality that is peppered with tough love and plenty of humor, searches for young talent that many might pass over on first glance.

As Kim likes to say, “You can wear a burlap sack, girl; but if you got it on the inside, it shines on the outside.” At the young age of 16, this former self-proclaimed “ugly duckling” was crowned the youngest Miss Georgia in the pageant’s history. Kim will be the first to say that winning Miss Georgia was great, but losing Miss America made her who she is today. Now, as the owner and CEO of her business, the renowned Pageant Place, Kim shares her incredible talents and over-the-top, engaging personality with the young, talented hopefuls seeking her sage advice that has proven to take young girls to the top.

On tonight’s show called, “Hillbilly in Heels,” renowned pageant coach Kim Gravel takes on outlandish hillbilly Addison and her mom Kelly as a new client. At first Kim’s pageant regulars are not threatened by the new girl but with a lot of polish and Kim’s determination to transform the ill-mannered redneck into a beauty queen, Addison just may surprise everyone.

Tonight’s Kim of Queens series premiere is sure to be a drama packed one, which you won’t want to miss. So be sure to tune in for live coverage of Lifetime’s Kim of Queens “Hillbilly in Heels” — tonight at 10PM EST.

The series premiere of Kim of Queens opens at “The Pageant Place,” were Kim is coaching beauty pageant contestants. Kim announces to her team of “pageant girls” that this season is crucial because they are entering the teen pageants. Today they are practicing their interviews for the upcoming pageants. Kim is worried, she doesn’t think any of her girls are ready to be the next “Miss Georgia.”

A new girl arrives at The Pageant Place, named Adison. Her Mom Kelly wants Kim to transform her fifteen year old daughter into a pageant girl. She is a little “rough around the edges,” her accent is so thick she needs subtitles. And, she is a bit of a tomboy, her hobbies are “hunting, fishing, and mudding.” Kim loves her though, she may have a lot of work to do, but she is very confident and bubbly. Kim takes her into her office to talk about an upcoming local pageant she would like to put her in. They have ot come up with a talent for her to perform though, she can’t sing, but she can clog dance. Kim doesn’t think clog dancers win pageants though.

Kim takes Addison out on the floor to work on her make-up for the upcoming pageant, “Miss Sweet Onion Blossom Pageant,” Kim reveals to the pageant girls and their Moms that they will have to wear camouflage outfits . Kim sends her Mom Jo and her sister Alyson out to find some camo pageant outfits for their girls to wear at the pageant. Kim is worried though because every time she says her mom and sister out, “it’s like dumb and dumber.”

Kim heads to Addison’s house to help her prepare for the pageant. She has a lot of work to do before “Miss Sweet Onion Blossom.” Kim is trying to teach her how to answer her interview questions. Kim has taken Addison under her wing because she reminds her of how she acted when she was a young teen girl.

Meanwhile Allisyn and Jo are busy at an army surplus store trying to find a camo outfit for Addison to wear at the pageant. They can’t decide on anything, Jo thinks Allisyn’s sense of fashion is “too redneck.” Allisyn loves bedazzling clothes though, and she plans to bedazzle Addison’s camo outfit.

Kim is still at Addison’s house. Now they are working on the talent aspect of the pageant. Kim doesn’t think clogging is “classy” enough, she wants Addison to learn how to tap-dance, she gives her a quick tutorial.

Jo and Allisyn are still on the hunt for a camo dress for Addison to wear in the Sweet Onion Blossom pageant, they think they may have finally found a winner.

Allisyn and Jo return to The Pageant Place with the camo outfits they purchased. Kim is less than thrilled, she thinks her Mom and sister are “worthless.” Her Mom Jo pulls out the camo dress and hat she picked out Kim falls in love with it. Allisyn is upset that Kim didn’t like the outfits she picked out though.

It’s Pageant day. The girls are preparing for the “Miss Sweet Onion Blossom Pageant.” Kam tells her girls to get ready, she wants “their lips to look like they just ate a pork chop with no utensils.” Kim is stressed, she has to make sure all of their girls’ make-up is on point. She helps Addison with herhair, concealer, lip-gloss, and eye-make-up. She looks like a completely different girl. Even Kim is shocked by her transformation. Jo thinks she “went from plain-jane to a princess.” Kim’s other girls and their Moms are worried, she may actually give them a run for their money.

There is a problem though…Allisyn forgot to bring Addison’s came dress. Instead they brought the ugly camo pants and shirt that Allisyn picked out. The dress that Jo picked out and Kim fell in love with…was forgotten. The pageant is about to start and they have no camo outfit for Addison to wear. Addison likes the ugly outfit that Allisyn brought though, and they “make it work.”

They are ready to take the stage, and Kim’s sister Allisyn falls and twists her ankle. They manage to pick her up and dust her off and get out on stage on time.

Kim’s girls get ready for their talent portions. Her first girl to perform Mara, forgets her dancing routine and stands on stage looking lost and confused. Addison nails her dance routine and even manages to cover up her accent during the interview. Kim is ecstatic, she thinks Addison may actually win.

It’s time for the judges to announce the results. Kim’s girl Anslee wins “First Runner Up.” And, Addison is crowned the next “Miss Blooming Onion.” Kim is overjoyed, and so is Addison’s mother, she thinks “Kim performed a miracle with Addison.”