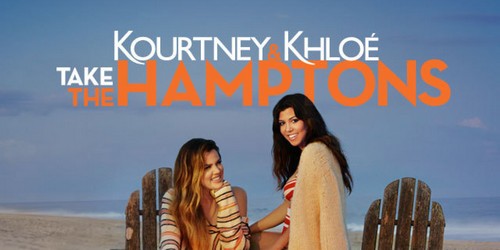 Tonight on E! Kourtney and Khloe Take The Hamptons continues with a whole new November 16, season 1 episode 3 called, “Party Crashing.” On tonight’s show Kourtney Karadshian flies to Los Angeles to have it out with sister Kim Kardashian, who is planning to “borrow”—without permission—Kourtney’s house for North West’s birthday bash.

On last week’s episode, Scott made an attempt to clean up his act and get back in Kourtney’s good graces after she got on his case for breaking the boundaries they set for their relationship. But when Khloé tried to encourage her brother-in-law through tennis, she ended up being accused of taking his side. Did you watch the last episode? If you missed it, we have a full and detailed recap right here for you.

On tonight’s episode as per the E! synopsis, “a fight between sisters, but not between the sisters who star on this E! reality series. Instead, Kourtney takes off for Los Angeles to have it out with sibling Kim Kardashian because she is planning to “borrow” – without permission, that is – Kourtney’s home for North West’s first birthday bash. Elsewhere, too much partying in the Hamptons places Scott Disick in the hospital and prompts him to arrive at a realization that things need to change. Yup, he may need to go to rehab.”

Tonight’s episode is going to be drama packed, which you won’t want to miss. So be sure to tune in for our live coverage of E!’s Kourtney and Khloe Take Hamptons Season 1 episode 3— tonight at 9PM EST! While you wait for our recap, hit the comments and let us know how excited you are about the new show of KKTTH.

Tonight’s episode of Kourtney and Khloe Take The Hamptons kicks off with Khloe and Scott planning a co-hosting gig on a radio show.  Scott and Khloe have been spending a lot of time together in the Hamptons, and Scott is pumped to do a gig with her.  But, Khloe receives a phone call from Kris informing her that the radio show doesn’t want Scott, just Khloe.  She reveals that she has been working them hard trying to get them to let Scott come but they aren’t budging and they aren’t interested in him.  Kris is afraid if she keeps pushing the Scott issue, then they are going to back out all together and cancel on Khloe.

Later Scott corners Khloe and wants to know if they are getting the show.  Khloe tries to change the subject, but Scott demands to know if they got a radio show.  Khloe finally explains that she got a radio deal, but they don’t want Scott because he is too wild and can’t contain his mouth when they are live.  Khloe feels guilty because she can tell that Scott is really upset about not being on the show with her.

Kim wants to throw North’s first birthday party at Kourtney’s house, Kourtney says “no” because she just bought her house and hasn’t even finished remodeling it yet and she hasn’t even had a party in it yet.  She doesn’t want all of their friends and family to see the house before it is finished.  Later that day Kourtney receives an e-vite inviting her to North’s first birthday party and on the invitation it says it is at Kourtney’s house.  Kourtney realizes that Kim’s assistant wasn’t supposed to send her the invitation and Kim is trying to secretly have the party at Kourtney’s new house without her knowing about it.  Kourtney is furious, she tells Khloe she is flying back to LA and crashing North’s birthday party to confront Kim.

Kourtney packs her bag and packs up the kids and prepares to fly to Los Angeles.  Scott is staying behind because his friends are coming in to town for his birthday appearance.  He explains that he can’t reschedule it or break the contract because he already pushed it back and changed the date once for Kim’s wedding.  Kourtney is a little nervous about leaving Scott behind and she is scared he is going to party too hard.  As soon as Kourtney leaves, Scott’s friends all show up to stay with him at the Hampton house.  He has the whole weekend planned, they’re having a dinner, then going to the club, and he booked them a boat ride.  Scott and his friends head out to dinner and start pounding shots.

Khloe heads to her new house in Los Angeles to check in on the progress of the remodeling.  Kendall shows up and Khloe gives her a tour and shows her the master closet and glam room, she even is having a photo booth installed.  Kourtney calls Khloe and Khloe warns her that she saw a huge crane arriving at her house for North’s birthday.  Kourtney is still furious with Kim and is headed over to her house to ask her what the hell she is doing.

Kourtney arrives at the house, and Kris and Kim are shocked to see her.  Kourtney confronts Kim and calls her disrespectful and wants to know why she is having a party at her house after she told her not to.  And, to top it off Kim has huge trucks and rental equipment driving all over her yard.   Kim tries to explain that by the time the summer was over and Kourtney returned from the Hamptons she never would have been able to tell there was a party there, and she even offers to buy her new grass.

Kim storms off and runs in to Kourtney’s house.  Kris tries to talk to Kourtney and tells her that she is over-reacting.  Khloe gives Kim a pep-talk and Kim heads back outside and pleads with Kourtney to let her have the party here.  She cries that she wants North’s birthday party to be special and she doesn’t want to have it at her mom’s house because it is too small – and she doesn’t have a home to have it.  Kourtney caves and decides to let her have the party there after all.

Meanwhile back at the Hamptons – Scott is wandering around the house wasted in the middle of the day.  His friends are obviously freaked out by how wasted he is.  His security guard carries him upstairs and puts him in bed.  But Scott keeps getting back up and begging his friends to drink with him and do pills with him.

North’s birthday party is a success, with carnival rides set up in Kourtney’s yard.  Kourtney calls home to check in on Scott later that night and he in the shower.  His friends take the phone upstairs so Kourtney can talk to him and she can tell he is wasted.  She lectures him about making sure nothing happens to the Hampton house and none of her stuff is stolen.

Scott gets out of the shower and heads downstairs for round number two and begins pounding drinks with his friends.  They head out to the club for his appearance and Scott keeps drinking all night and celebrating his birthday.  He doesn’t see how he is doing anything wrong because it is his job to host parties.  Scott winds up in the emergency room because he drank too much and took too many pills.

The next day in LA Kourtney fills Kim in on what happened the night before.  Scott’s friends hid his anxiety and sleeping pills from him because he was so wasted, so Scott kicked in the door and took all of the pills in the bottle.  He called Kourtney wasted and crying and saying that he was dying, so his friends took him to the emergency room.    The next day Kourtney and Scott start making plans for him to go to rehab.