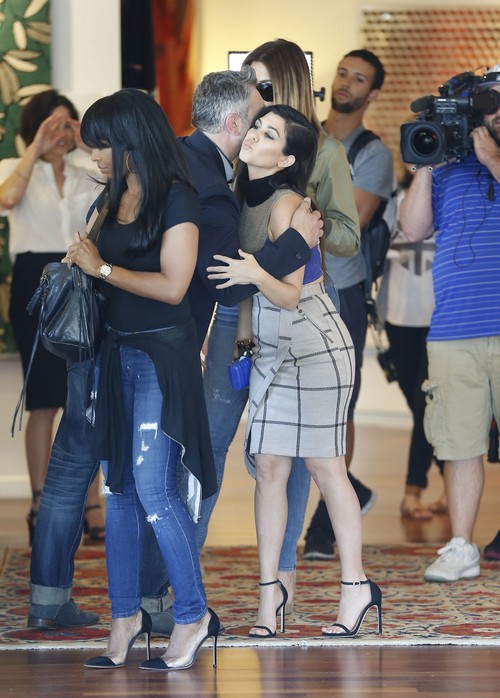 The Kardashian Klan has had a rough run these past several months and so any good news is a welcome relief. Sure Kim Kardashian and Kanye West are planning that huge Parisian wedding but thanks to neither of them being smart enough to check into French laws, the actual ceremony may be just as fake as everything else they try to pass off as “reality”. The family has been in dire need of some legitimate good news and it looks like Kourtney Kardashian may be the one to provide it.

According to the April 21st print edition of In touch magazine Kourtney is indeed expecting baby number three with her boyfriend of 8 years, Scott Disick. Kourt has made no secret of the fact that she wants a big family and she also wants her kids to be close in age so the timing is kind of perfect. According to In Touch she has been spotted out in the last few weeks promoting the Kardashian Kids line wearing baggy coats and resorting to other choices designed to hide her growing figure. However in the pic set below taken April 12 you can see that Kourtney isn’t hiding anything – is that a tiny baby bump we see? Supposedly Kourtney has no intention of confirming her pregnancy until after Kim’s wedding because she doesn’t want to steal her sisters’ thunder.

Do you think it’s wise for Kourtney to expand her family with Scott? He’s the kind of guy that gets himself together but never seems to actually manage to keep himself together. At least not for very long anyway. Still, will Kourt’s baby news at least give the Kardashian family something to be excited about and will Kris Jenner use it to try and benefit them all financially? Tell us your thoughts in the comments below!

Update: We hear from sources around the web that Kourtney might in fact be pregnant – they told us to look for the small baby bump in the pics below.

Kourtney Kardashian makes an appearance at Kardashian Khaos at The Mirage Hotel & Casino in Las Vegas, Nevada on April 12, 2014.