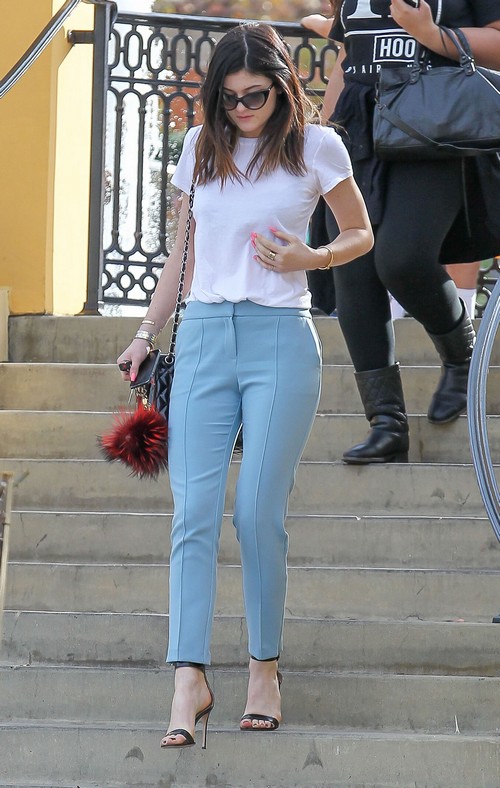 Kylie Jenner has taken to Twitter to deny allegations that she and her sister Kendall Jenner are forced to date Jaden Smith and Harry Styles for publicity.

Keeping Up With The Kardashians’ youngest reality starlets Kylie and Kendall Jenner seem to be following in their sister Kim Kardashian’s footsteps and dating well-known celebrities. Kylie has been rumored to be dating Will Smith’s son Jaden Smith for months now, and her sister Kendall recently started dating One Direction singer Harry Styles. Rumor has it, there is no coincidence that the Jenner sisters are each dating celebrities, and several websites have reported that the sisters’ Momager Kris Jenner “only lets them date famous guys.”

According to Kris’s daughter Kylie Jenner, there is no truth to the recent rumors about her Mom forcing her and her sister to date celebrities though. Today on Twitter the young reality star tweeted this message, “some people actually believe I would waste my time dating someone as a publicity stunt.”

Kylie and Kendall are growing up, they’re not the cute little awkward tweens we used to see back in the day on Keeping Up With The Kardashians, and they have minds of their own. I am sure Kris doesn’t “force” them to date Harry Styles or Jaden Smith just for publicity, but I also doubt that Kris Jenner has no influence whatsoever on her youngest daughter’s romantic partners. Do you honestly think if Kylie and Kendall brought home a burger flipper from a nearby fast-food restaurant, Kris Jenner would let them go out on a date?