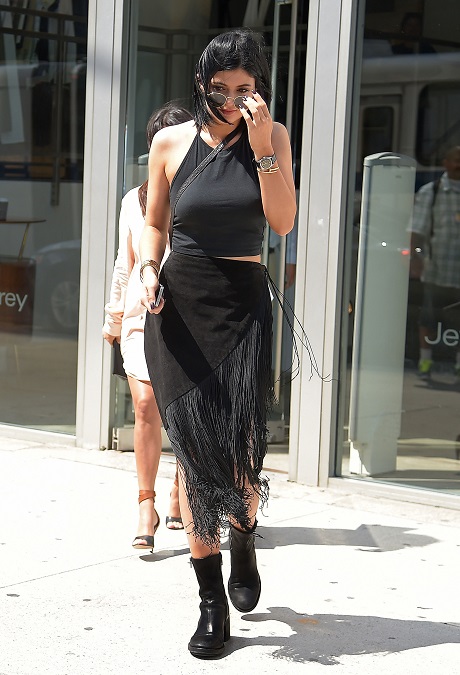 There is a rite of passage for all of Kardashians when you become an adult: either make a sex tape or get bucketloads of plastic surgery. Preferably both. Kim Kardashian is a perfect example of this, as are her sisters, Kendall Jenner and Khloe Kardashian. Kim, of course, went the full monty – so to speak. She set off a chain reaction, initiating her family’s fame and taking advantage of the reality show obsession when it was just starting to peak. And now, it’s Kylie Jenner‘s turn.

So what it’ll be, Kylie? An order of fish lips? A side of breast implants? Perhaps a sex tape to go? According to Heat Magazine, it’ll be all of those, plus some. The magazine claims that Kylie is planning on getting $85,000 worth of plastic surgery for her 17th birthday, paid for by her loving and caring mother, Kris Jenner. Heat’s source also adds that this will allow Kylie to compete with Kendall for attention, since Kendall got the natural good looks and modeling career.

Heat’s source adds, “Kendall is a natural born model. Kylie says she’s happy for her but, behind the scenes, all her friends know she’s jealous.” Yeah, I think that’s pretty obvious, even if Kylie pretends like she’s happy for her sister. But never fear, Kylie. You too can look like your sister with some jawbone shaving, a small nose job, liposuction, extensions, and a host of other procedures.

I mean, forget embracing her natural beauty and living life to the fullest, especially when she’s already an attractive young woman. Being attractive with the Kardashians just doesn’t cut it. No, you either have to be really famous or look like a wax doll a la Kim.

Kylie Jenner tries covering her face after arriving on a flight at LAX airport in Los Angeles, California on July 1, 2014. Kylie was returning from a trip to New York where the rest of her family is filming their reality show. Rumors are going around that Kylie wants to have 50,000 dollars worth of plastic surgery because she is jealous of her sister Kendall’s looks and modeling career.