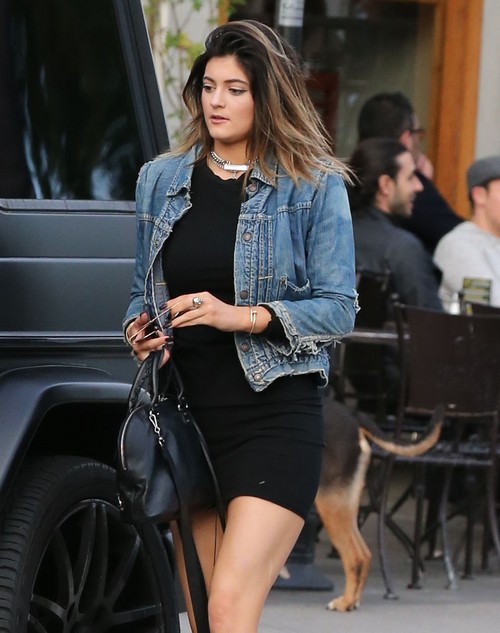 Has Kylie Jenner followed in the footsteps of her sisters and gotten plastic surgery at the tender age of 16? Keep in mind, most of the Kardashians’ faces started morphing from when they were very young, and almost none of them are recognizable to their teenage selves. And it looks like Kylie’s gone ahead and gotten an early start to the transformation as well. CDL already pointed out that Kylie got breast implants for her sweet sixteen and the pics sure back that up.

According to a new report from In Touch Weekly, Kylie has changed a lot over the past year, with In Touch’s source explaining, “Her face has changed. Considering the work her sisters have had, I wouldn’t be surprised if she got an early start.”

The source adds that Kylie often felt like the ‘ugly duckling‘ in the family, which increased her motivation to get her face tweaked last year. Plus, we know that Kris Jenner encourages her daughters to get plastic surgery as early as 9 years old, so why would she complain about Kylie getting anything at 16?

Anyway, what are all the procedures that Kylie’s supposedly gotten? Well, botox injections in the forehead, lip injections, and a nose job. The lip injections are very believable, especially because there’s picture proof of Kylie’s lips looking noticeably plumped from one week to another. The nose job is also probable because her nose does look different to how it used to look, and nose jobs are old hat for the Kardashians. Botox is a little less of slam dunk, mostly because teenagers already have flawless foreheads and I don’t see why she would even feel the need to get botox.

What do you guys think? Has Kylie Jenner gotten plastic surgery or is her face just changing naturally? Let us know your thoughts in the comments.