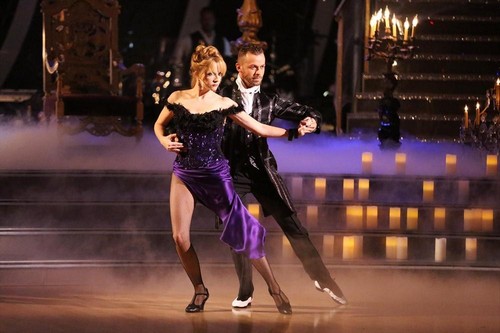 Tonight on the season 19 week 9 of Dancing with the Stars American actress,television director and television producer Lea Thompson & and her partner Artem Chigvintsev danced a Samba dance to “Animals.”  On tonight’s show the six remaining couples will dance to a song and dance style voted on by viewers for “America’s Choice.”  For the first time ever, America has creative control of the couples’ first dance, asking fans throughout the week via Twitter, Facebook and Instagram for their input on wardrobe, set design and visual effects.

On last week’s episode Lea performed a Jazz Routine.   The judges scored Sadie a 32/40.  If you want to see her Jazz routine from last week, you can check the video out here.

Vote for Lea Thompson and professional dancer Artem Chigvintsev at voting #: 1*800*868*3407.  IIf you want to know what the judges said about her performance tonight head over to our nifty recap, right here.