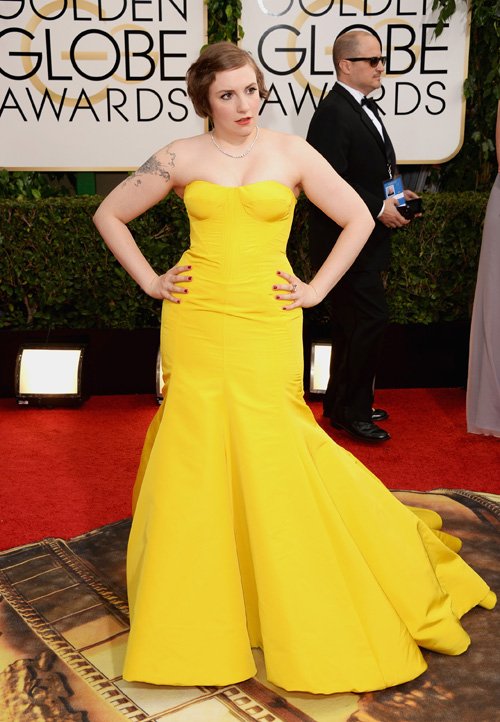 Certain reports are claiming that Leonardo DiCaprio, the acclaimed actor who doesn’t win many things (but happened to score himself a Golden Globe the other night), had a run in with Girls creator Lena Dunham — and it got awkward. Sources say that all Lena Dunham wanted to do at the 71st Annual Golden Globe Awards was to “impress” Leo in her yellow, “tight Zac Posen dress.”

These claims come from Star and, while we can sometimes pull a glimmer of truth from these articles, this one just seems a bit ridiculous. Don’t you think Lena Dunham, who doesn’t really care what anyone thinks of her, would have other things on her mind, things that didn’t involve impressing some celebrity she has no real connection to? According to the magazine, when Leo ran into Lena he“could barely contain his horror at her garish gown” and an eyewitness claims “he painfully forced a fake smile.” The magazine also adds, “He had a hard time complimenting her.”

What do you make of this story? You don’t honestly think Leo would be this asshole-ish in real life, do you? While we don’t think Lena Dunham was powered by THE NEED TO IMPRESS LEO that night, there is the chance that she wanted to meet with him and, if that’s the case, we hardly think Leo would act so immature (or Lena so oggle-eyed and starstruck). Lena has officially asserted her fame and role in Hollywood and is quickly becoming just as powerful, if not more powerful, than many of the celebs that were at the globes — especially within the world of television.

I personally think this story is just jumping on the bandwagon of tabloid stories focusing around Lena’s body, which is constantly scrutinized, primarily because she’s so open about her sexuality and body on her hit HBO show. Perhaps we should just focus on her talent, which is abundant, and stop worrying about how she looks in dresses.