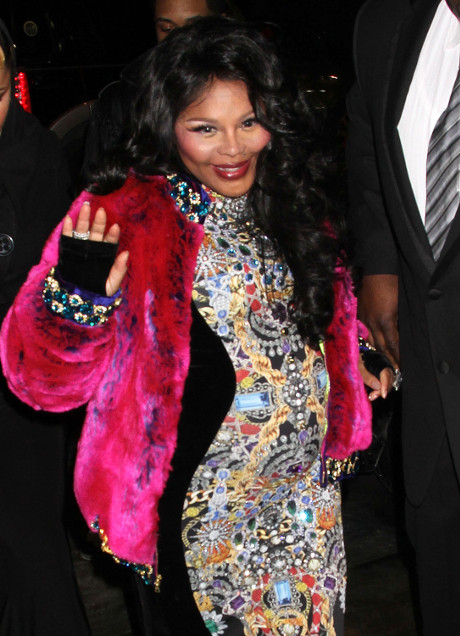 Well look at what we have here. Looks like Lil’ Kim “The Queen Bee” is on her way to being called “The Mommy Bee.” If you were wondering what the Brooklyn rapper has been up to, well, then CDL has got the answer: Baby making. Certainly no one expected this shocker announcement coming from New York Fashion Week. But, hey, if you’re going to make this sort of bombshell reveal you might as well do it in style.

Lil Kim showed up Wednesday night for The Blondes show at MILK Studios wearing a tight long front panel dress with floral print, and boy were those flowers spread out over her belly! Lil Kim certainly picked the right dress to send her pregnancy shock waves out, because the dress made it clear…there is a baby bee baking in Lil Kim’s oven.

This news exploded onto the web with her Twitter fans going wild with crazy comments. Although some of the commentary was insulting, most of it centered on the question folks immediately started asking themselves: Who is the father of Lil Kim’s baby? Depending upon who you ask, the answer may vary, but there are two possible suspects. The first possible baby daddy is none other that Floyd “Money” Mayweather.

Lil Kim has long held a close friendship with Floyd and the two are often spotted hanging out together in clubs all over the globe. You are probably thinking that just because they are two friends that hang out, it doesn’t mean that Floyd is out fathering babies with Kim. Well, as it turns out, Kim was jet setting around the country with Floyd on his private jet about five months ago. Kim’s baby bump looks as if she is about 5-6 months pregnant. Coincidence? Maybe. Or maybe not!

They spent a lot of, uh, quality time together during that trip. Floyd was lavishing the Queen Bee with a bunch of expensive gifts and things. Noticeably absent from their travels was Floyd’s fiancée, Miss Jackson. So the circumstantial evidence is adding up and definitely has folks wondering if this is another case of an “on break” baby.

The other more likely contender is Lil Kim’s long time boyfriend, a New York rapper who goes by the name of Mr. Papers. Not much is known about him in mainstream media, but he is supposedly pretty popular in the underground New York hip-hop rap scene. Mr. Papers has been re-tweeting congratulation tweets sent to Lil Kim all day, leading us to believe that he is the probable father of Lil Kim’s baby. At least that is what he wants us to believe. It could be one of the situations where dude is just stirring the pot because he is a hater and is mad at Money May because he has gone and knocked up his rapper bee.

The jury’s still out until we get an official word from the Queen Bee herself. Until then, inquiring minds will be left to wonder. Give us your two suds in the comments below and help us wash this load out. Check out Lil Kim’s baby bump in the gallery below!