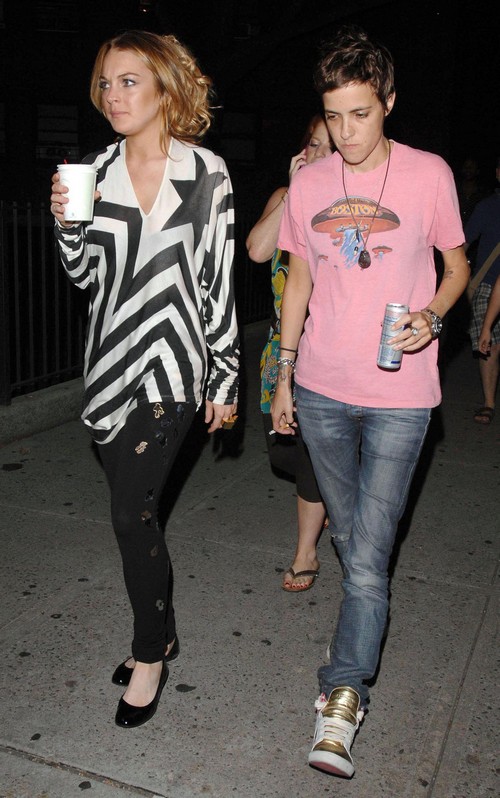 Lindsay Lohan is still more famous for her crazy shenanigans than she is for her role as an actress – but do you think she even cares about that? Spend enough time in the spotlight, and it no longer matters what they do, but the attention that results from it. Lohan is a prime example of this, and her shitty parenting only contributed to it.

Either way, you know the National Enquirer might actually be right when they say that Lohan is plotting her return to media domination by attempting a reconciliation with ex-girlfriend Samantha Ronson. A source tells the Enquirer, “Lindsay has been bombarding the British DJ with texts, flowers and gifts in hopes of rekindling their romance — but it’s NOT because she’s been struck by Cupid’s arrow!”

Obviously, Lindsay’s reasons for such a reunion would be purely self-serving, and the report echoes that. This source claims that Lindsay’s sole goal in reuniting with Samantha is because, “she believes marrying Sam on camera would drive up the show’s ratings — and beef up her bank account.”

And how does Samantha Ronson feels about this? This source claims that she’s actually ‘flattered’, and isn’t doing anything to stop Lindsay’s attempts at a reconciliation. See, this is where they lost me. I can 100% believe that Lindsay would stoop to such desperate measures to regain her former glory, but I don’t believe that anybody who’s sane would ever agree to this. Sure, Samantha used to date Lindsay, but that was when Lindsay was half-way sane and normal. Right now, she’d be kissing her career goodbye if she was ever caught with that trainwreck again in public.

What do you guys think? Can you glimpse a Lindsay and Samantha reunion in the offing? Let us know your thoughts in the comments.